February 04, 2010
Looks like branding time at Walt's, where there's not a bookshelf, let alone any books, in sight. 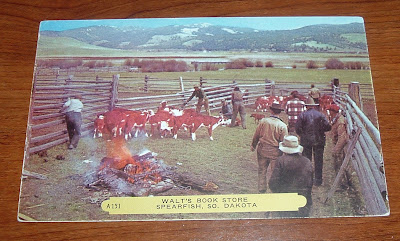 Here's a curiosity of a post card, circa 1955, for Walt's Book Store in Spearfish, South Dakota. From the photo, either Walt's had a run on his inventory or this is the future home of Walt's. Gotta do something about those cattle first. Looks like the branding irons are in the fire and some of the cattle are already getting their tattoos.

All cattle, no books. I don't know what this says about Walt or his book store. Maybe Walt was a rancher, ran a few head of cattle. Probably his book store stocked Western Americana, ranching and range books. Or he just liked this picture and didn't care that it had nothing to do with his books or his store.

I don't blame him if that's the case. It's beautiful country. Better than looking at a building with his business name painted on it. Gives tourists something nice to send or save, as appears to be the case with the purchasers of this card. 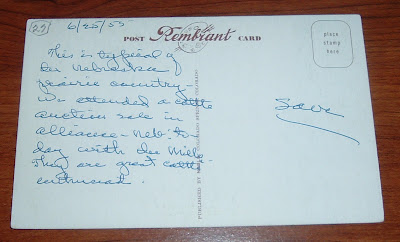 There may be some confusion about where they were, though. They refer to the picture as typical for Nebraska prairie country. Spearfish is closer to Wyoming than it is to Nebraska, its neighbor to the south. But maybe it does look like the Nebraska prairie and they finally found a postcard in Spearfish that looked like Nebraska.

If they had time to browse Walt's shelves, I wonder if they might have come across this 1908 "range classic," Abortion in Cows, by David Roberts, D.V.S. 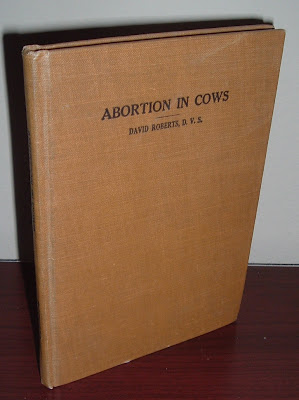 I just found this book a few days ago and had to buy it for the unusual nature of the subject, the date, and its condition. Somehow, it made me think of Walt's post card, which I've had a good while now.

The book was probably just as scarce in 1955 as it is now in 2010. As far as I can tell, I have the only copy in the world. At least, nothing's showing up on the Internet. Then again, Walt's Book Store doesn't show up in the photo, if you trust your eyes. But I think the book I found pairs up nicely with Walt's post card.