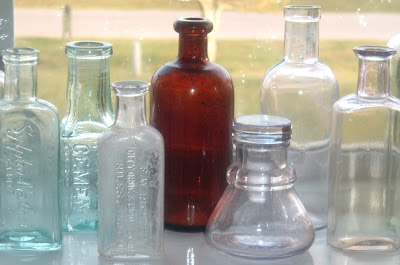 What's an old drugstore bottle got to do with ephemera, especially bibliophemera?

I guess it depends on how you define ephemera. Or how much you want to stretch that definition. Webster's Third New International Dictionary (that 10-pound big boy) defines ephemeral as lasting or existing briefly. That would qualify a medicine bottle as ephemera, but I know the definition has evolved to mean printed matter.

But this bottle came from a drug store that was also a bookstore. F.W. Richter ran the City Drug & Book Store in Niles, Michigan, as stated on one side of the bottle. Richter is listed in an 1891 issue of the pharmacy journal, The Western Druggist,making this a relic of at least the late 19th century.

My old bottle collection of some several dozen comes from a couple of summer vacations of digging around old cellar holes and dump sites in New Hampshire when I was a teenager (many years ago). The "book store bottle" is a recent addition, purchased from a Michigan dealer on the Internet. As I've never seen a bottle advertising a bookstore before, I thought I'd post about it here (lacking any other place to show it off).

The bottle, in need of a good cleaning, stands three and three-quarter inches tall and is about an inch and a quarter wide at the base. It's a small bottle and there's no way of knowing what kind of medicine or tonic it contained. It's an interesting item to be associated with a bookstore, but it comes from a time when books were often sold in small shops with stationery, wallpaper, household items, drugs (evidently), and other products. I found an old ad for Richter's that speaks to that variety: 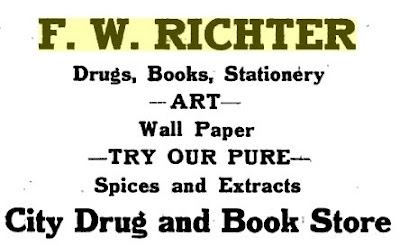 This and other ads were reprinted in the cookbook, Tried and True: A Collection of Approved Recipes, by Trinity Church (Niles, Mich.)


I have many billheads that advertise a business as "booksellers" and then go on to list all the other things they sell. I'm pretty sure these businesses were not selling second-hand or antiquarian books. Likely they were useful books to have around the home or farm--account books, how-to books, almanacs, and the like, or a few reprints of classic literature. A lot of small independent booksellers today have had to diversify to survive, mixing new retail with gifts, cards, toys, coffee, what have you.

One of these days, I'll find an old billhead advertising F.W. Richter's books and other wares to go with the old bottle. That has happened before with another company--found the glassware first and later the printed ephemera. I'll write about that one another time.