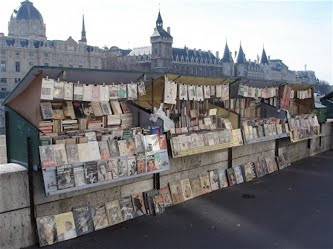 Bouquinistes are in the news. Read about the Parisian book stall rift on the river Seine in the British newspaper, The Independent. Here's an excerpt:

To stroll along the Left Bank close to Notre Dame cathedral used to be to promenade, simultaneously, through one of the most beautiful of all cityscapes and the biggest open-air bookshop in the world. The little book stalls – 235 of them, on both sides of the river – are still there. Some of them remain purely, or largely, bookshops, specialising in old tomes on the cinema, or science, or military history, or the works of Jules Verne. Others have become almost indistinguishable from souvenir stalls, festooned with posters of typical Parisian views in untypical colours or garish reproductions of early 20th-century, metal advertisements for cures for chillblains.

After years of neglecting the growing difficulties of the bouquinistes, the Paris Town Hall, which owns the spaces and lets them free of charge, has decided to clamp down. Over 40 stall-holders have received registered letters in recent weeks. If they do not obey the rules – which prescribe that at least 75 per cent of their stock must be books, old magazines or fine engravings, and that no more than 25 per cent may be tat – they risk being thrown off the quays by April.

The warning has forced some stall-holders to switch rapidly, and reluctantly, back to books. It has also revealed deep divisions, and jealousies, within the ranks of the bouquinistes themselves.

That reminded me of an old post card I have in my collection of the bouquinistes, circa 1910: 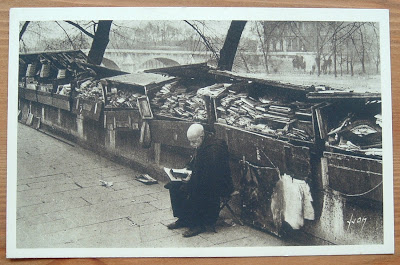 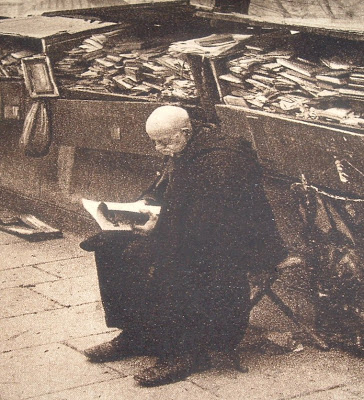 I was there briefly--touring the Notre Dame Cathedral, cruising the Seine on a Baton Mouche--but I somehow missed the bouquinistes. A tight schedule, no doubt, but I kick myself now for not having wandered over to check them out. That was 15 years ago and I haven't been back. Some day. And I hope the booksellers will have won out. It would be no fun to stroll down the Left Bank and rummage through a bunch of souvenir trinkets--something I just wouldn't do anyway.

From the looks of the photo post card I have above, it would be more like dumpster diving. If it's for books and vintage ephemera, though, I'm game. I've sifted through worse looking piles than those. And without the adjacent scenery. That's a tough one to beat!
booksellers bouquinistes Paris post card