March 11, 2010
Things that readers leave behind in their books are referred to as flyaways. Sometimes these things are used as bookmarks, sometimes the book is just a convenient place to stash something for safekeeping. Now where did I put that twenty dollar bill?

The most interesting (or perhaps most touching) thing I ever found was a small collection of Valentine cards and notes from two little girls to their father, penned about 1960. I found them several years ago and thought they must have been put in the book for safekeeping and were long forgotten. I decided somebody should get these back. Some quick research revealed the father was deceased, but one of the girls turned out to be author (A Return to Love) and lecturer (A Course in Miracles), Marianne Williamson. I was able to find an email address for her and we corresponded about the items, which she, of course, wanted to have, as both her father and sister had passed away. So some 45 years later they found their way back one of the sisters.

Getting back to the flyaways that prompted this post... Bibliophemera is not the usual find, surprisingly, but yesterday, I hit a trifecta of flyaways that relate to those things biblio. Cataloging books, I found a 1950s bookstore announcement card, a 1980s author promotional photo post card, and a 1940s-50s bookmark.

First up is the Witkower's bookmark, Witkower's having once been the name of a Hartford, Connecticut book store with a long history through several owners and name changes.

A 1992 Hartford Courant article, by Jocelyn McClurg, Courant Book Editor, provided the history behind Witkower's Book Store, Israel Witkower having been but one owner in the long genealogy of that store, whose patronage included President Lincoln and Mark Twain.

The city's oldest bookstore has a colorful history and a complicated lineage.

The business was launched in 1835 when Caleb M. Packard and Flavius A. Brown began selling books in a store lit by whale oil lamps at 20 State St. When it opened, Packard & Brown's was one of seven bookstores in the city. In 1935, a Courant article said that no inventory existed of the store's original stock, but "doubtless religious books headed the list."Partners came and went, and the store evolved into Brown & Parsons in 1838, Flavius A. Brown's in 1852 and Brown & Gross in 1858. In 1846 the business moved to the southwest corner of Main and Asylum streets, where it remained until 1869. The store then moved to 77 Asylum St., which took weeks as thousands of books were carted up the street in wheelbarrows.

In March 1860, Abraham Lincoln, on a campaign swing through the state, stopped in Brown & Gross, where he and Gideon Welles of Glastonbury -- the future secretary of the Navy -- talked politics.

Brown & Gross lasted 33 years and attracted such famous customers as Mark Twain, who spent nights in a back room in the bookstore telling ribald stories, and Harriet Beecher Stowe, who sat in a chair and had books brought out for her perusal. In 1891, when Gross died, the store's name changed to Belknap and Warfield's, for Leverett Belknap and George F. Warfield, who had joined Brown and Gross as partners. From 1910 to 1929 the store was called G.F. Warfield & Co.

Israel Witkower, who became a partner in 1920, assumed ownership when Garfield retired in 1929, and the store was called Witkower's for more than three decades.

Isaac Epstein worked for Huntington and bought the downtown business in 1979. After Isaac Epstein died in 1988, his son David took over.

A year after this article was written, the succession of book stores ended for good as Huntington's closed its doors in 1993, a victim of the economy and the big chain booksellers that had moved in nearby.

Next up is an announcement card from a long-defunct Houston book store called Books, Inc. The 1959 card announces an upcoming annual pre-inventory sale. 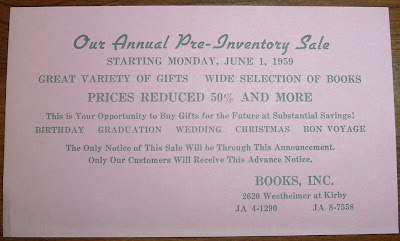 I have little else on the history of the shop, other than it resided on Westheimer at Kirby (for anyone familiar with Houston). I never went in there, that I can remember. Sam Williamson, whose book held the Valentines and notes mentioned earlier, may have bought some of his books there. He was a local attorney and well-read by all appearances. A chunk of his library comprised a large load of books I bought in 2003, but I don't recall coming across any Books, Inc. shop labels affixed to any of Williamson's books. The store was still viable as a book store in 1982, according to an advertisement I found from that year, but nothing resembling a book store exists in that location today.

The last item I found yesterday, stashed between the leaves of a book, is this photo postcard of author Robertson Davies. 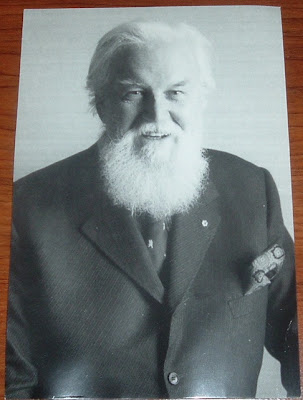 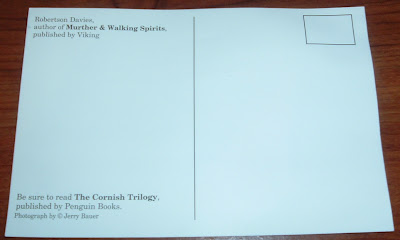 The back of the card promotes the Canadian writer as the author of Murther & Walking Spirits and of The Cornish Trilogy. Speaking of which, Davies authored a trilogy of trilogies: The Deptford Trilogy, the aforementioned Cornish Trilogy, and The Salterton Trilogy.

That's it for the flyaways. Most things I find are not related to bookish matters or historically significant, and they have little or no interest to me. Those flyaways become filed away, as in the trash can.