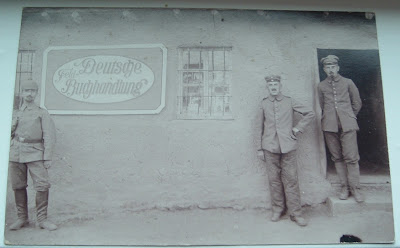 The handwritten letter on the reverse side is dated 21 May 1917 from Kanatlarci, Macedonia, which was occupied by the Germans during the Balkans Campaign of the Great War. 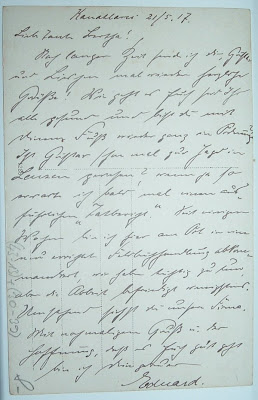 The post card was not posted; there is neither a stamp nor a cancellation mark. Perhaps it was included with a letter or written and never sent. Regardless, the author undoubtedly never envisioned his note landing in Texas nearly a hundred years later.

I can't make out the handwriting enough to take a stab at the German-to-English translation, but I did get Kanatlarci and the date, which told me World War I. A little research confirmed that quickly.

The sign in the picture, plus the books in the window, confirm we're looking at some kind of book shop. The sign reads, Feld-Deutsche Buchhandlung, which translates, I believe, to Field German book shop.

But what kind of book shop? I interpret this to be book shop set up in "the field," i.e., a military post during wartime occupation of a foreign country. I thought at first this might be for the troops, to provide them with something from home. Literature from German authors in the German language. I rejected that later because, well, why not a library to fill that need? They wouldn't make the soldiers buy the books. And if the building housed a library for the troops, the sign would read Bibliothek instead of Buchhandlung.

Perhaps this book shop was for the citizens (and military) in Kanatlarci to buy and read German propaganda, to learn about the conqueror's culture and history. I just don't know.

This did get me to thinking about other wars and if similar stores were set up by armed forces in occupied lands. Starting with Iraq and Afghanistan and working back in time, I couldn't find a single instance of a similar occurrence. That doesn't mean there weren't any, but I'm just not finding them if they exist. I spent a few hours searching from various angles with a variety of keyword combinations. Nothing like the Feld-Deutsche Buchhandlung turned up.

I'll keep researching because I'm interested in how books or a book shop figured into the strategy of a military campaign or for the operations of a military post in a foreign country. There was clearly a purpose for this book shop. Perhaps a reader will see this who can shed some light on the subject.