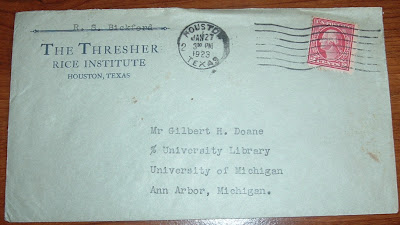 I got this 1923 ad cover for The Thresher, the student newspaper at Rice Institute (now Rice University) in Houston because of the local history, which I collect. Turns out, though, it has a pretty good biblio angle so I thought I'd share it here as a piece of ephemera appropriate for this blog.

Had it not been connected to my native city's history, I might have passed on this piece and I would have overlooked the book connections and interesting history that I discovered by researching the addressee on the envelope--Gilbert Harry Doane (1897-1980).

Doane was a librarian and professor with positions at several university libraries, most notably the University of Wisconsin. He was also an author, genealogist, and book collector. As one of his books (About Collecting Bookplates) would suggest, he also collected bookplates. Other books he wrote included The Legend of the Book and Searching for Your Ancestors. I've done a lot of genealogy research over the years and have actually owned and read Searching for Your Ancestors. At the time, I paid little, if any, attention to the author. 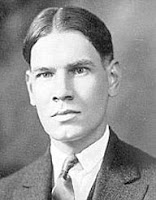 Doane appears to have worked first as a genealogist, when he took a position, upon graduation from Colgate in 1918, with the Genealogy Society at the U.S. Naval Training Station. That's an interesting pairing and I would like to know what exactly the Genealogy Society was doing for the U.S. Naval Training Station. As World War I was ending that year, or may have ended by the time Doane went to work, I wonder if the Navy was putting together some kind of genealogical archive of biographical data for those who served in the war. The photo of a young Doane and a reference to his genealogy work (and other interesting work during another WWII) was found HERE.

At the time of the letter from The Thresher's office at Rice Institute to Doane, in care of the University Library at Michigan, Doane would have been working at the library and working toward his second graduate degree. One assumption I have about this letter is that someone at The Thresher was writing Doane about sending copies of the Rice newspaper for his library's collection. Possibly, Doane had inquired and The Thresher office was replying to his inquiry. 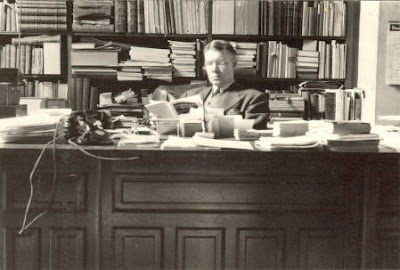 And here's another image of Doane at work, which I like better (looks like the way I work sometimes!). I found it at a site celebrating University of Wisconsin-Madison's School of Library and Information Studies' 100th anniversary: 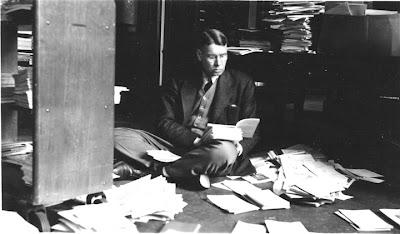 World War II interrupted Doane's career from 1943-1945 when he was recruited for service with the Monuments, Fine Arts, and Archives (MFAA), an interesting U.S. Army program where, as Captain Doane, he aided the Allied Forces in the protection of historical monuments and the conservation and restitution of art and cultural artifacts stolen by the Nazis. He left the service as a Major in 1945.

The MFAA was an interesting part of World War II history that I was unaware of until I started researching Gilbert Doane. I plan to look for more information about this program and the National Archives in Washington, D.C. has a document that seems a good place to start: Records of the Monuments, Fine Arts, and Archives (MFAA) Section of the Reparations and Restitution Branch, OMGUS, 1945–1951

Doane returned to Wisconsin after his hitch with the MFAA and in 1956 assumed the position of Archivist with the University of Wisconsin. He retired in 1962 as Professor Emeritus.

A couple of other interesting facts about Doane before I leave him, gleaned from the MFAA site: He was an ordained priest in the Episcopal Church and served as historiographer of the Diocese of Milwaukee between 1937 and 1967.

This piece of ephemera is a prime example of why I like collecting such things, in that you never know where or what you will uncover with a seemingly insignificant piece of paper. From this postally-used envelope with a return address of interest to me, some interesting history came to light about librarianship, books, genealogy, and even some interesting history from the Second World War.