An agent in the bookseller's basement

May 25, 2010
N. Tibbals & Sons have an agent in their New York basement at 124 Nassau St. So states the trade card for their publishing and bookselling business. 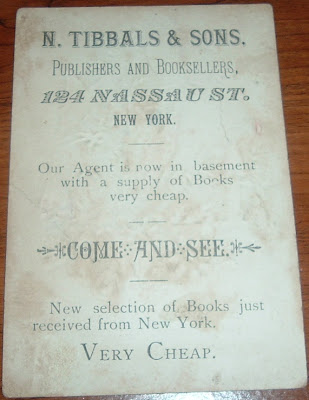 The back of the card states their agent is now in their basement with a bunch of very cheap books. And you need to come and see for yourself. These books have just come in from New York (Isn't Tibbals in New York?). And did they mention how cheap they are?

The front of the card has the typical colorful Victorian, flowery decor, this one with butterflies. These images seldom, if ever, have anything to do with the business indicated on the card. But this card reiterates the business pitch on the front also, not the business name. In case you missed the message on the flip side, these guys have a basement full of very cheap books to sell you. There's an agent down there, too. 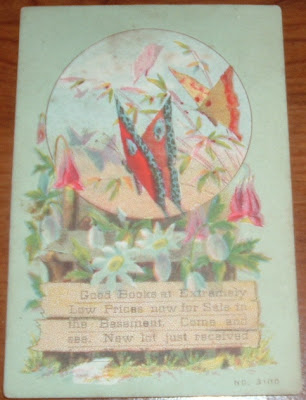 According to Publisher's Weekly, Volume 52, in an obituary for Nathan Tibbals, N. Tibbals & Son started in 1848 and conducted business for years at 37 Park Row in New York City, in the old World building. After a fire destroyed the building, and evidently not their books, N. Tibbal & Son moved to 26 Warren Street. A name change for the company occurred in 1888, when they incorporated to become the Tibbals Book Company. Nathan Tibbals had nine children, but only one--a son named John A.J. Tibbals--joined the book business, hence the former name N. Tibbals & Son. Information about the incorporation and name change in 1888 helps date the card to pre-1888.

Based on that reported history, there are a couple of curiosities noted on their trade card. First, the name "& Sons" implies more than one. Maybe John wasn't the only son to join up with Nathan in the family business. Or maybe that's a misprint. The other curiosity is the street address. Publisher's Weekly offers two addresses--one before the fire and one after, neither of which are on Nassau St. This trade card indicates there was at least one other address for the business--124 Nassau St (where they had an agent in the basement trying to unload some very cheap books). 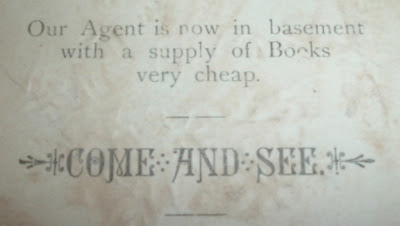 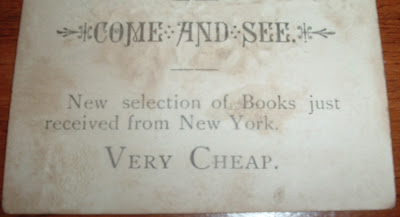 Over at the Thoughts of Bibliomaven blog, which has been far too silent this year (hint, hint, Cary...), there is an 1883 example of a Tibbals trade card with some additional history on the book company that takes it into the 20th century.