May 22, 2010
April 11, 1962--the New York Mets were playing their first ever Major League season game. Rained out the previous day in St. Louis for their opener, their first game was pushed to the next day, April 11th. They lost to the Cardinals 11-4 as Stan Musial went 3 for 3 to help lead the attack against the hapless expansion club. (Side note: A few months later, I got to watch Musial & Co. beat my hometown expansion team, the Houston Colt .45s, for my first big league ball game at age six.)

Sometime that same day, about a hundred miles or so up the road in Decatur, Illinois, a lawyer and future judge walked into the book shop, Haines and Essick, to hunt for some interesting treasure and walked out with Charles P. Everitt's The Adventures of a Treasure Hunter: A Rare Bookman in Search of American History. 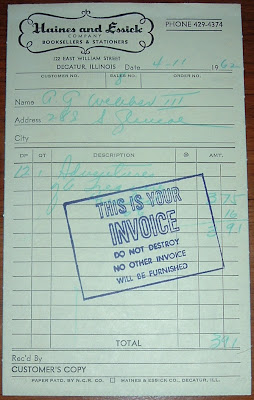 He left the invoice in his book, and years later both the book and its bookseller ephemera found their way into the hands of James Haselden, a Madison, Wisconsin bookseller, collector, reader, and book hunter--in short, a bibliophile(maniac?). Add excellent writer to that list and then check out what Bibliofisher has been finding on his treasure hunts via his blog: This Week in Book Hunting. If you're not familiar with this blog and Bibliofisher's finds on the book trail, hustle on over and get caught up with some vicarious discoveries. And now he's generously donated this invoice from one his discoveries to the Bibliophemera cause.

From the Decatur newspaper Herald & Review archives, I learned that Haines & Essick was established in 1902 by Harry E. Haines and W. Roy Essick as a stationery store and bookstore, which evolved into both retail and textbook sales. They still exist more than a hundred years later, though in a much different form.

Striglos is their parent company. Books are still part of their inventory, but apparently not a large part. They share space with toys, office supplies, and even a kitchen boutique (whatever that is) with cooking classes. I suppose there's potential there for a tie-in with an author who has a new cookbook out.

Textbook sales are now with a sister company, Millikin Books (under the Striglos umbrella), which serves Decatur's Millikin University (history with a haunting twist!) student and faculty needs. 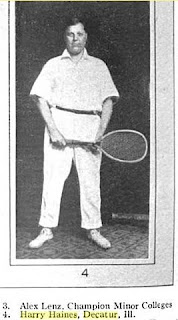 Harry E. Haines was the Haines behind the bookselling team on the invoice. You might not know it to look at the picture on the left, but Haines, at one time, was known as Mr. Tennis of Decatur. (image source)

The Herald Review has the tennis history on Haines, but also reveals that he died in 1963 at age 92. Wonder if he was in the shop the year before when the judge stopped in and bought the Everitt book?

Partner Essick was Walter Roy Essick, born in 1876 in Preston, Iowa. He worked as a bookkeeper before partnering with Haines in the bookselling business.

I have no idea if Essick shared his partner's love of tennis, but Haines' interest in sports evidently included golf as well. From another Decatur news article, I learned about a golfing couple and the husband's passionate interest in the sport turning bibliophilic in more ways than one. He acquired over time some 4,000 books about golf, the earliest titles circa 1880s. Yet even more interesting, perhaps, is his antique golf club collection because it includes a few 1920s era wooden-shafted ones stamped, "Haines & Essick." Yep, Haines & Essick, the booksellers.

I see a first on two possible fronts here: 1) A bookselling firm who sold books and golf clubs with their brand on them and 2) A golfing bibliophile who has a book shop's golf clubs and maybe, just maybe, some of their books, too.

Finally, on this historically dense little invoice, there is the customer, Albert G. (A.G.) Webber, III. From the preceding link, here are some interesting tidbits about the man whose name is on the invoice:

Judge A.G. Webber III was a brilliant scholar. Friends said he arose at 5 a.m. each day to read the classics in Greek.

He was an outspoken member of the Decatur Book Club. "I remember well the first book I reviewed," he said. "It was 'Lady Chatterly's Lover' by D.H. Lawrence. The book had been banned previously. I had a pirated copy I picked up in China in 1945. It was a piece of trash."

1987 retirement, he was a consultant for the law firm of Welch Kehart Shafter and Hughes, now known as Kehart Peckert and Booth.

"He helped us in the office, and he wrote a history of our firm," Michael Kehart said. "He was a very smart fellow."

Webber proved his writing ability by becoming a Herald & Review "Prairie Talk" essay writer during the early 1990s with a couple of humor pieces.

He passed away in February 2009 and his estate was auctioned off to benefit the Millikin University Art Department.

Among the items mentioned from Webber’s estate there was a large desk that once was in the administration offices of A.E. Staley Mfg. Co., an 1867 Tiffany, a 13-star flag, and a hand colored lithograph from the 1893 World’s Columbian Exposition in Chicago. Webber was certainly a collector of Americana, judging by these items and the book he bought from Haines and Essick, The Adventures of a Treasure Hunter: A Rare Bookman in Search of American History, certainly was a fitting purchase for his collecting interests.

Fine Books & Collections Magazine had a related comment from David Meyer of Meyerbooks, Publisher, which I'll copy below because of his remarks about Charles P. Everitt and his book that the judge bought in Decatur, Illinois the day the Mets began playing ball:

I am pleased to add a footnote to Kurt Zimmerman’s article, “Armchair Adventures: Ten Classic Accounts of American Book Collecting,” which appears in the November/December issue (#30) of your magazine. For those who do not insist on reading it in the first edition, The Adventures of a Treasure Hunter: A Rare Bookman in Search of American History by Charles P. Everitt is available in a trade paperback edition. I published the reprint in 1987, with an introduction by Jack Matthews. Everitt’s book was actually ghostwritten by Barrows Mussey, a book publisher and collector, who, in a letter to me, explained how the book was written: “My contract with [the publisher] Little, Brown included all the bourbon Charlie Everitt could drink, and in the course of writing I actually bought two or three cases of Old Grandad. It was a relatively moral arrangement, because I, being a rum drinker, did not take more than a glass an evening of the private stock, for sociability.” Everitt’s book was published after his death in 1950 and was a selection of the Book-of-the-Month Club at the time.

You gotta love that! I don't have a copy of Everitt's book, but after reading this, I want the 1987 reprint (in addition to a signed first someday) because I'm a big fan of Jack Matthews' writing.

This unassuming invoice yielded a bounty of history and links to interesting people, places, and information. You just never know where a few scribbled lines on a piece of paper will take you back in time, nor how it will affect you in the present. I will buy a new book this coming week and a bookseller somewhere will put a few extra coins in his or her pocket because of this ephemeral item that got saved over the years and passed on. Thanks again, Bibliofisher, for donating it to the Bibliophemera collection. Now, heading back to the future... 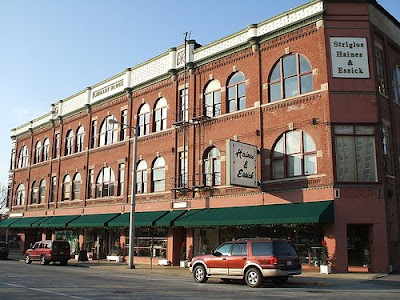