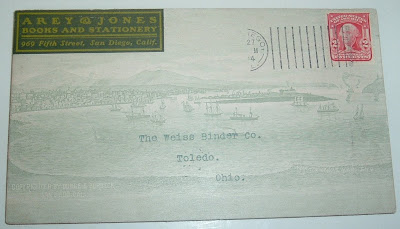 This is one of my favorite covers in my collection--an engraved image of what I assume is San Diego's harbor, an elaborate, eye-catching scene by which San Diego booksellers Arey & Jones could make a statement about their business. It's not quite what collectors term "illustrated all over" because the backside is blank. So I guess this could be called... full frontal illustrated?

Whatever, it's a beautiful cover. The engraving was done by Marr & Richards of Milwaukee. This firm did many engravings of panoramic maps and bird's eye views popular in the late 1800s to early 1900s. The booksellers appear almost an afterthought, but they wisely chose a bold-colored return label to "rescue" lookers from the captivating water scene. 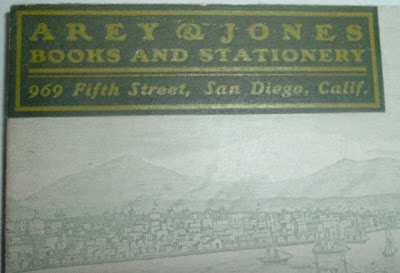 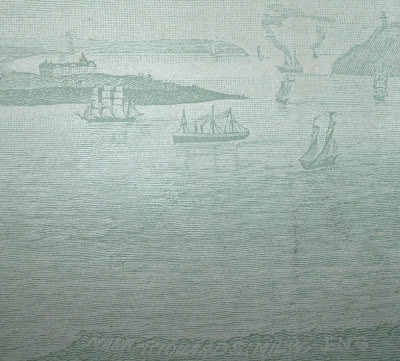 There's not a lot of information on the early history of Arey & Jones, but a Publishers Weekly ad from August 28, 1897 pins down their beginnings with the following announcement:

Arey & Jones announce that they will open a book and stationery business about September 15th, also that they will be pleased to receive catalogues and circulars from the trade.

But if you look closely at the lower-left corner of the envelope, a new name emerges that will figure into the company's history at some point: Copyrighted by Dodge & Burbeck of San Diego. 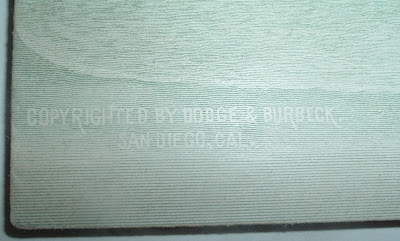 Dodge & Burbeck's name is associated with a few books published in the 1890s, but that's about all the information I can find on them presently. I don't know what happened to Dodge (he got the hell out of San Diego?), but Burbeck surfaced in a few places while researching the name. I should have known to check the Seven Roads Gallery--they have labels for just about any bookseller you can think of. That includes E.M. Burbeck of San Diego and the same Burbeck partnered with Avery & Jones, courtesy of collector Donald Francis.

The San Diego Historical Society has a couple of interesting photographs pertaining to Dodge & Burbeck. Below is an image of their bookstore in downtown San Diego, circa 1890. Following that photo is one of a group of pack mules headed for the mines. Not sure what that has to do with a book and stationery firm, but there you have it. 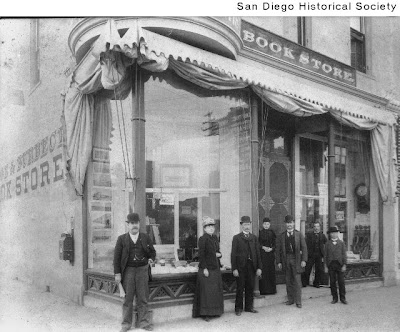 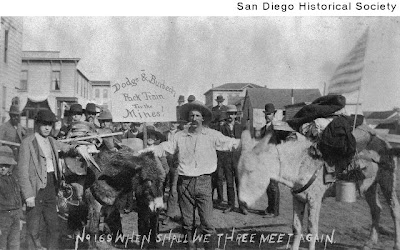 I have a feeling that Burbeck, Avery & Jones partnered in the 1890s after Dodge & Burbeck, but before Avery & Jones set up shop in 1897. A 1901 copy of Sunset Magazine, by the Southern Pacific Co. lists Burbeck and Avery & Jones as separate booksellers among a list of those selling the magazine. E.M. Burbeck's name pops up here and there up to the 1930s and then fades from the archives available on the Internet. Of the three firms, only Arey & Jones survived not only into the 20th century, but also the 21st century.

As the current-day company strives to stay abreast of cutting edge technology to competitively serve its clients, an ephemeral piece of business correspondence (an envelope) from the firm's progenitor more than one-hundred years ago displays the same spirit with the creative use of artistic technology of its day to bring attention to the business.

Perhaps Dodge & Burbeck should have ditched the mules and foregone the mines for a visit with those Milwaukee engravers Marr & Richards...