June 26, 2010
From 1994-2001, Grolier, Inc. published a series of collectible cards called Story of America. They were issued by subscription only in decks of 20 cards, one deck at a time, and each card featured an historically significant event, place, or person in American history. Frankly, I never even heard of this set of cards, but if I had I doubt I would have guessed there could be a card for a book collector. But there is such a card and it is for Arturo Schomburg (1874-1938). 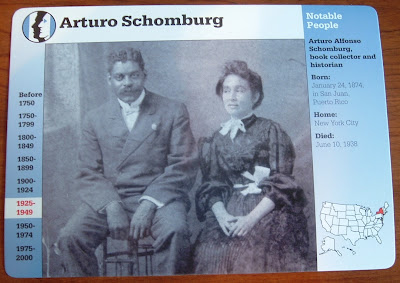 Arturo Schomburg and his sister in 1905 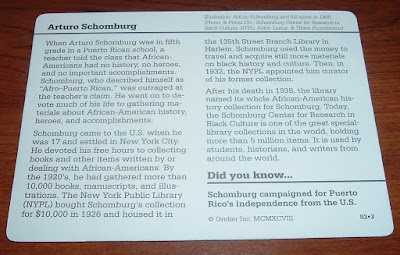 Arturo Schomburg (about whom I was also unaware) was no ordinary book collector. He was a prolific collector of books and ephemera about African American history, heroes, and accomplishments. But there was more to the man than just collecting books, as you will see.

One of his elementary school teachers inspired in him the passion to collect this history, but not in the usual manner you would expect from a teacher. Schomburg and the rest of his fifth grade classmates received a lecture on how blacks had no history, heroes, or accomplishments. This was in Puerto Rico in the 1880s. Schomburg, who described himself as Afro-Puerto Rican, set out to prove that teacher wrong and soon began searching for literature about people of African descent. That spark evolved into a burning desire to collect everything he could by and about Africans and African-Americans, particularly after he emigrated to New York.

From a University of Michigan exhibit of his collection, this statement sums up the material he sought and his desire to find it:

Arturo Schomburg would look everywhere for books by and about African people. He also collected letters, manuscripts, prints, playbills and paintings. He was especially proud of his collection of Benjamin Banneker's Almanacs. In fact, his library contained many rare and unusual items from all over the world. The history of the Caribbean and Latin America and the lives of heroic people in that region was also an area of special interest to Schomburg. And he actively sought any material relative to that subject.

In the 1920s, some thirty years after Schomburg had moved to New York, he had amassed more than 10,000 pieces for his collection. The New York Public Library (NYPL) offered him $10,000 for the collection. Schomburg accepted the offer and used the money to travel in pursuit of even more materials about black culture and heritage. In 1932, the NYPL appointed him curator of his former collection. Schomburg died in 1938 and the NYPL decided to honor him by naming the collection the Schomburg Center for Research in Black Culture.

According to the Grolier card in 1998, the Schomburg Center is "one of the great special-library collections in the world, holding more than 5 million items." Likely, more than a decade later, the library can boast of even more materials.

For more information about Arturo Schomburg and related subjects, visit his page on the africawithin.com site: