June 15, 2010
I recently went to Austin for a meeting of the Texas Booksellers Association and had the pleasure beforehand of visiting with Bill Holman in his studio. I enjoyed hearing more stories about his book, The Orphans' Nine Commandments, the writing process, and anecdotes and history about books, booksellers, printing and ephemera.

Several months ago, he told me he had set aside some ephemera I might like and I could get it on my next trip to Austin. Last week, he handed me a large folder chock-full of print ephemera treasure. I was truly touched by his generosity. As a printer, publisher, and designer, Mr. Holman's gift to me pertained to print ephemera created for items such as publishers' book announcements and printing exhibit brochures and prospectuses--a number of them from the Book Club of California.

Many, if not all, will eventually find their way onto this blog, but one jumped out at me right away for its timeliness (more on that further down) and I thought I'd make it the first piece to share here. It's a prospectus for the publication of Mark Twain: San Francisco Correspondent - Selections from His Letters to The Territorial Enterprise: 1865-1866, edited by Henry Nash Smith and Frederick Anderson (The Book Club of California, 1957). 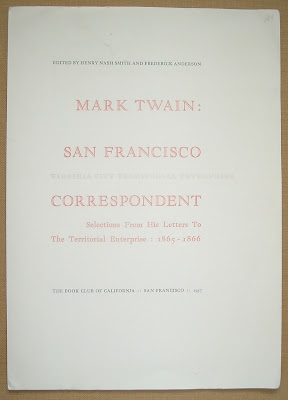 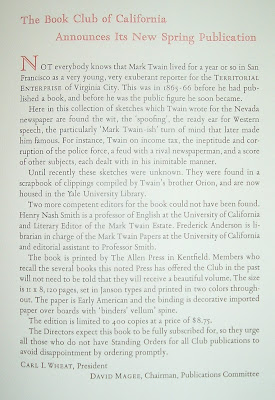 At the twainquotes.com site, I found the page, Mark Twain in the San Francisco Dramatic Chronicle 1865 - 1866, which reports on Twain's journalistic endeavors in San Francisco. It contains an index of the articles he wrote for the Dramatic Chronicle, as a correspondent for the Virginia City Territorial Enterprise. Without having read the book mentioned in the Book Club of California prospectus above, I would imagine their 1957 publication of Twain's letters to the Territorial Enterprise contains many of the articles (letters) referenced at twainquotes.com, with some scholarly commentary on the subject. 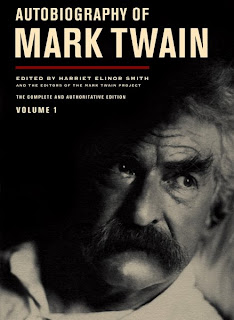 This is timely for the reason that just last month it was announced that Mark Twain's autobiography would be released later this year. Per the author's wishes, his autobiography was not to be published until one hundred years after his death, which occurred in 1910. The University of California Press will make Volume 1 (of 3 volumes) available in November.

Twain's original manuscript for the autobiography resides at the University of California, Berkeley, Bancroft Library, as part of the Mark Twain Papers & Project. The manuscript has been available to the public for viewing and, at times, Twain's estate has even allowed small parts of it to be published. However, the November publication will be the first time the entire autobiography has been published. It will be interesting to see if there is any new material to supplement that which was published in Mark Twain: San Francisco Correspondent. Or even anything on this.