Picky smokers and their first editions

June 16, 2010
Here we have a couple of guys who are very particular about their first editions, so declares the ad copy in the vintage magazine advertisement below. Their discriminating tastes, we learn by reading further, extend to their cigarettes, particularly the British brands Three Castles and Passing Clouds made by W.D. & H.O. Wills. 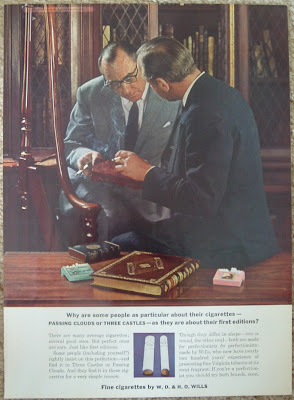 Their pickiness, however, does not seem to extend to the handling of their first editions, as they are exposing these volumes to smoke damage and odor, as well as risking burn marks from their cigarettes' ashes. 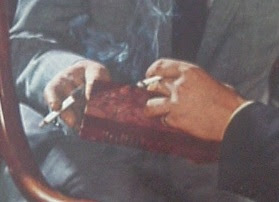 I'm intrigued with the way ad campaigns have used rare books and bibliophiles in the past (haven't seen any in the present) to sell unrelated products. From the few ads I've collected from that earlier era, the relationship they tried to convey seems humorous, even ridiculous, by current-day standards, but in the first half of the 20th century, rare books appear to have held a much higher status for discriminating consumers than they do today.

The ads I've featured here and here in the past were amusing in their use of rare books for hawking cars and whisky. This one seems ridiculous, at least by today's standards. I seriously doubt you'd catch a couple of rare book collectors today examining a valuable book with cigarettes dangling in harm's way.

The culture has changed for sure, with respect to cigarette smoking, but didn't bookmen back in the day understand the consequences and risk of juggling rare books and cigarettes at the same time? Or was this just an ad agency's misguided vision of how a couple of connoisseurs might interact with vellum bound incunabula and other rarities?

But I recall a photograph of some important bibliophiles where a similar thing was happening as in this ad, only this event included tobacco and alcohol. I mentioned incunabula because the photograph was of a famous specialist in the field, who was hosting a party in one of his book rooms with cocktails and cigarettes among the rarities. That specialist was none other than Hans P. Kraus and the book with the photograph was his autobiography: A Rare Book Saga. 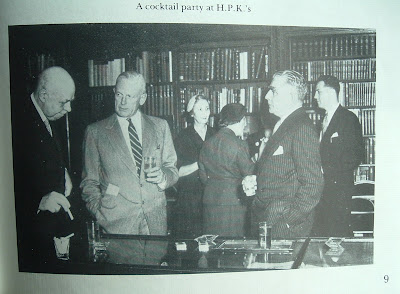 Perhaps this photo vindicates the ad company that produced the piece above. Perhaps there was a more relaxed attitude with certain social customs of the day. But around the stock that Kraus carried? I don't get that, but I still think the cigarette ad is amusing for the comically risky behavior of the purported knuckleheads bibliophiles, who are so particular about their first editions.