The Virginian rides into print... and history

June 18, 2010
In 1902, Macmillan issued this notice about the publication of a new novel. I wonder if they foresaw how important this book would become in American literature? 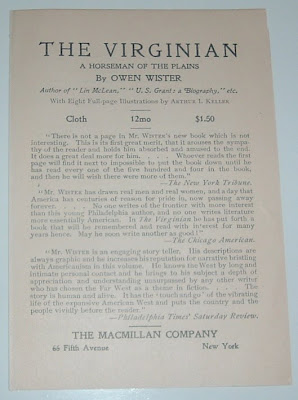 The Virginian, by Owen Wister (1902) was the first serious fictional work about the cowboy on the American frontier. The cowboy myth originated in this work--the strong, silent type who gets the girl, kills the bad guys, and doles out his brand of justice in the Wild West. It set the standard for the genre of Western fiction.

Of the three book reviews listed, the Chicago American was the only one that speculated on its importance to future generations of readers:

"In The Virginian, he [Wister] has put forth a book that will be remembered and read with interest for many years hence."

This press release from Macmillan is printed on a single sheet, folded in half to a size about 4 X 6 inches. Other titles are advertised inside and on the back, but aside from The Virginian, the only other noteworthy book is one that President Theodore Roosevelt co-authored: The Deer Family, an initial volume in Macmillan's The American Sportsman's Library series. 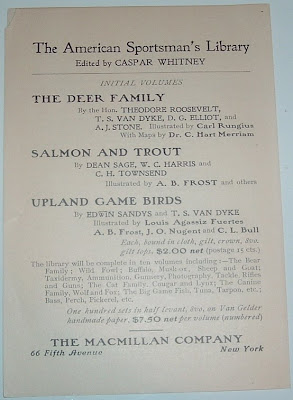 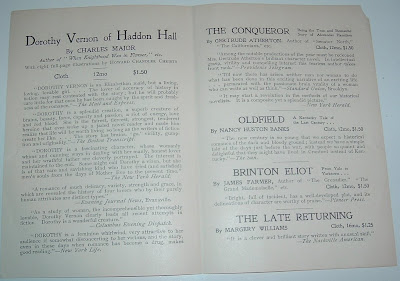 It's also interesting to note that in 1902, a first printing of The Virginian, fresh off the press would set you back $1.50. Today, a thousand times that figure would be a starting point for obtaining a decent copy. And you could spend upwards of a thousand more. That's in the $2500 neighborhood.

Fans of The Virginian, Wister, or cowboys and the West will find something of interest on the Wister page at cowboypoetry.com.