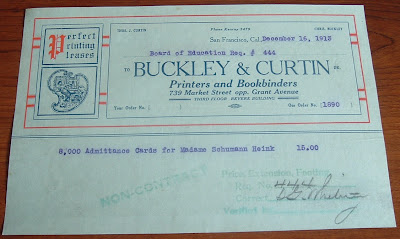 Buckley & Curtin were printers and bookbinders in San Francisco around the turn of the last century. Other than their billhead above, I can find barely a trace that they existed. So this post is about to veer off on a tangent into unbookish waters because there's enough on the name associated with the order to keep this post going.

From Buckley & Curtin's billhead slogan, I assume that printing was their mainstay, more so than bookbinding, and they aimed to please with perfection: "Perfect Printing Pleases." I hope for their sake that their customer was perfectly pleased with the order. But then the total cost for all that was only $15.

The Board of Education (San Francisco I presume) ordered 8,000 admittance cards for Madame Schumann-Heink back in December of 1913. Had the Board not liked the final product, they would have had 8,000 reasons to be angry with Buckley & Curtin.

Sounds like a lot of cards and a lot of admittance to something. But admittance to what? Finding the answer to that question begins with asking another question. Who was Madame Schumann-Heink?

Her Wikipedia page has this opening statement:

Ernestine Schumann-Heink (15 June 1861 – 17 November 1936) was a celebrated operatic contralto, noted for the size, beauty, tonal richness, flexibility and wide range of her voice.

Opera fans will appreciate all that. I like some opera, but I'm far from being an aficionado, so I had to consult the San Diego Opera's Operapaedia online (because they turned up in a search) to learn about just what a contralto was. Quoting from the Operapaedia Glossary:

The lowest of the female voice-types, this is an extremely rare bird and true contralto roles are few and far between.

I'm guessing the Board of Education had something to do with a concert for the rare bird, Schumann-Heink, and was trying to bolster attendance at her shows with the admittance cards (what else could the be for?). Coincidentally, at the time of this billhead, Schumann-Heink was living on about 500 acres near San Diego. So maybe she was touring California giving concerts and San Francisco was one of the stops. But why the Board of Education needed 8,000 admittance cards for her show was another mystery.

As I researched this, I wondered if there was even a venue in California in 1913 that could seat 8,000 or more? None of the old Opera Houses I've come across would seat anywhere near that number. And if she could have gotten 8,000 people to come hear her sing, she must have been a rock star of her times.

...managers of the San Diego Panama-California Exposition declared March 22, 1915 "Schumann-Heink Day." Some 6,000 schoolchildren sang "America" before the singer at the Balboa Park Organ Pavilion. Mayor Charles O'Neall presented her with an honorary citizenship award. In return, she promised to give a free concert at the Exposition in June.

On the evening of June 23, the eagerly-awaited event occurred. For the over 27,000 people at the Pavilion, it was the event of the year. A San Diego Sun reporter reached for the limits of hyperbole: "The greatest organ, the greatest voice, the greatest chorus, the greatest outdoors on earth, she's golrious (sic)." At the diva's request, attendants allowed children under 16 to enter the grounds free. 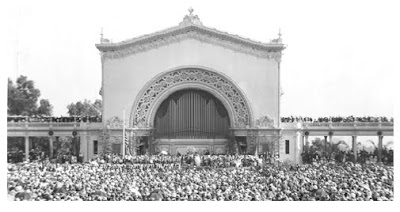 So she was a "rock star!" I'm astounded by the 6,000 school kids singing for her and the 27,000 that attended her concert. This was 1913 and those numbers seem quite astonishing. Many star performers today don't get those kind of attendance figures. I once saw Luciano Pavarotti, an operatic superstar of his time, in a venue that seated about 15,000 and maybe half the arena was filled.

Whatever the reason for all the admittance cards for Schumann-Heink in San Francisco in 1913, Buckley & Curtin made a few bucks that day. I don't know how Ms. Schumann-Heink and the Board of Education fared with their projected (hopeful) attendance, but here's a sampling of what the bearer of an admittance card might have heard:


And with that, I guess this post is over.