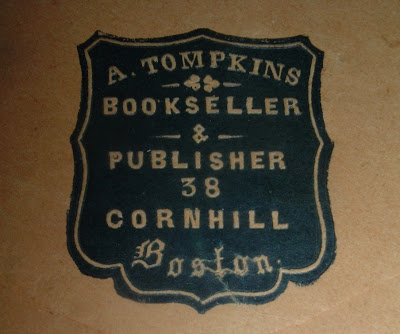 Cameos are small embossed advertising graphics on postal covers, popular in the nineteenth century. They are highly collectible today with the more elaborate designs for unusual businesses reaching prices upwards of a thousand dollars, some a good bit more. Most I've seen seem to fall in the $100 to $200 range. An exception was this little booksellers & publisher's cameo I picked up for around $15. It did have a tiny tear and was on the back of the envelope. The design is pretty much a standard shield, so those factors add up (or down) to an affordable cameo.

To see examples of what is also termed cameo corner card covers, click HERE for some interesting (and expensive!) designs that have sold at auction. A bookseller's cameos or anything book related is very scarce. 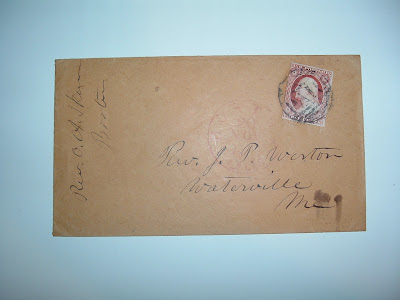 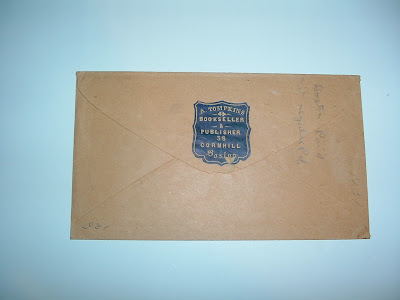 A. Tompkins was Abel Tompkins, a Universalist bookseller and publisher in Boston. His book shop was on Cornhill, a street known as an important center for the book trades in Boston during the 1800s. Tompkins' shop was at one time the headquarters of the Universalist ministers.

Just as I began to think I was in for a struggle to piece together bits of biographical data on Tompkins, I stumbled upon an obituary page from 1863 (year of Tompkins' death) from the Universalist Register, which provides a nice little biography of Mr. Tompkins. The preceding link takes you to it, but I'll also copy it here in case the site, or that page, disappears one day.

Abel Tompkins, (the publisher for 26 years of our "Ladies Repository,"-for 14 years, of our "Register,"-for 13 years of our "Quarterly,"-for 12 years of our "Rose of Sharon," and, during the past 25 years, of a large proportion of our Sunday School and other denominational books,) died in Boston, April 7, 1862. Born in Boston, June 22, 1810, he was reared there, and learned book binding. In 1830, he became much interested in Father Ballou's preaching, and exerted himself to get up the Sunday School in his church, and to effect improvements in the appearance of our books. In 1836, he purchased the "Ladies' Repository," and opened a small bookstore. From this period, his name is intimately connected with our literature, the encouragement of our literary talent, and the general progress of our cause in Boston and the region round about. Whatever he touched showed his correct taste and improving skill. He was one of the earliest members of the Warren street church, and among the first to discern and encourage the merit of our early writers-Mrs. Scott, Mrs. Mayo and her husband, Mrs. Jerauld, Mrs. Soule, E. H. Chapin and others. When the "Universalist Expositor," after several ineffectual efforts was abandoned, he revived it, and as the "Universalist Quarterly," continued it to his death, leaving an injunction to continue it, if possible. Yet it was never a profit, often a loss to him. The "Rose of Sharon," (1840-1852) was one of the best annuals of its time, and did more than any other work, to introduce favorably to the outside world, Universalists and their writings. He was ever planning and working to exalt, improve and extend a knowledge of the character of our denomination, and his first thought in undertaking any publication, seemed to be whether it would be creditable and usefu1 to our cause. Yet admirable as was his denominational spirit, he was equally estimable for his public and social, and beloved for his domestic and private life. He honored nobility of soul, and goodness, scholarship, and genius of whatever sect-whatever was beautiful in nature or art, or excellent in humanity. Thus intelligent, genial, and affectionate-forbearing, generous and charitable-he died as he lived, a Universalist; and those who knew and loved him, in their admiration of the man, and sorrow at his death, forget (if they knew) that he had any of the imperfections and frailties of our common humanity.

Coincidentally, the sender of the letter with the Tompkins cameo was Rev. Otis A. Skinner, whose biography is also listed an a Universalist Register obituary page. Nothing on the recipient of the letter, though--Rev. J.P. Weston of Waterville, Maine.