July 15, 2010
Yes, Bookshope (a spelling translation error perhaps). Modern East Bookshope, to be exact, according to this piece of postal history from Iraq. 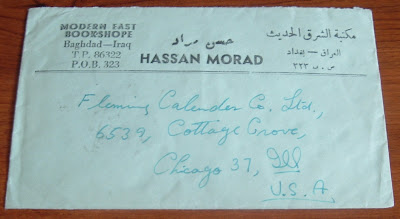 I cannot find one iota of information about this book shop (or shope) or Hassan Morad, whom I assume was the shop's proprietor. I wonder, though, if the shop might have been located on Baghdad's historic street of booksellers, Mutanabbi Street, much of which was destroyed by a car bomb on March 5, 2007. 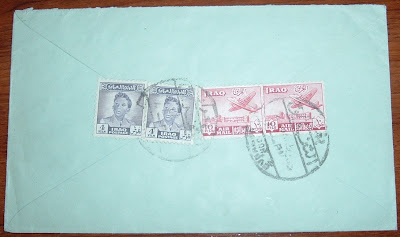 The backside of the envelope could offer some clues about the time period that the Modern East Bookshope was in business, but the cancellation date is illegible. The stamps however are a good backup to determining the year. I can't find them yet, but they appear to be 1930s or 1940s issues. The addressee on the letter, Fleming Calendar Company, appears to have been in business from the 1930s-1950s, as records available on the Internet would indicate. That's consistent with my guess on the stamps' issue date.

This last paragraph has nothing to do, specifically, with the postal cover above, but it relates directly to both ephemera and books. I came across something interesting while researching the Modern East Bookshope and I wanted to include some information about it here. The response to the bombing of al-Mutanabbi Street evoked outrage, resulting in at least one creative project I know of--The Al-Mutanabbi Street Coalition, which called on letterpress printers to create broadsides to protest and commemorate the bombing. More than 100 (130 by some counts) broadsides have been created thus far and are permanently housed at the Arthur & Mata Jaffe Center for Book Arts, in the Wimberly Library at Florida Atlantic University.