For Independence Day in America and all the proud displays and waving of the country's star-spangled banner, here's a rare books auction catalog that features the autograph manuscript of The Defence of Fort McHenry, otherwise known as The Star-Spangled Banner, the nation's anthem that will be heard "o'er the land of the free and the home of the brave" today. 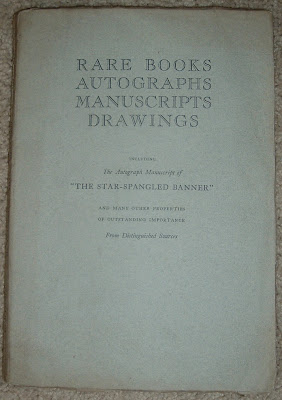 This catalog sports the lengthy title: Rare Books, Autographs, Manuscripts, Drawings, Including the Autograph Manuscript of "The Star-Spangled Banner" and Many Other Properties of Outstanding Importance from Distinguished Sources.

The auction was held at American Art Association - Anderson Galleries in New York City, with the sale (Sale 4073) conducted by Hiram H. Parke and Otto Bernet, who would later open their world famous Parke-Bernet Galleries. But in January of 1934, they were auctioning from the collection of the late Henry Walters the original autograph manuscript of Francis Scott Key's The Defence of Fort McHenry ["The Star-Spangled Banner"] together with a unique copy of the earliest broadside edition. 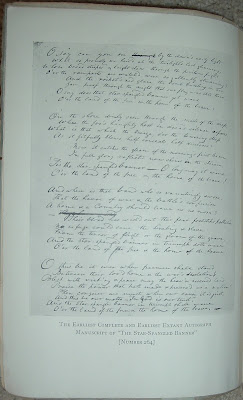 During the War of 1812, Francis Scott Key, an American lawyer detained on a British truce ship in Baltimore Harbor, witnessed the bombardment of Fort McHenry through the night of September 13, 1814. Early the next morning, as daylight revealed to him that the American flag still flew over the fort, he knew the defense had been successful, and he was inspired to write the poem In Defence of Fort McHenry. 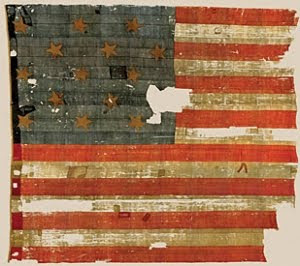 The Fort McHenry flag at the Smithsonian
A few days later, released by the British, Key copied and revised his poem and showed it to Judge Joseph H. Nicholson, his wife's brother-in-law who was a commander at the fort during the bombardment. Nicholson's reaction was very enthusiastic and he quickly had it printed into broadsides that included instructions for singing it to the tune of an old British drinking song "To Anacreon in Heaven," which Key had in mind while writing the poem. 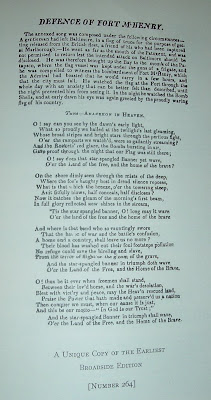 The broadsides made their way around Fort McHenry and the city of Baltimore, where a month later it was performed for the first time to music with the title changed to The Star-Spangled Banner.

But Key's handwritten verse that was used to have the broadsides printed evidently stayed with Judge Nicholson. It would be handed down through the Nicholson family for the next 93 years. In 1907, it left the family and was purchased by Henry Walters, referenced earlier in this post (see link above). He died in 1931 and the manuscript went on the auction block three years later as the premier item listed in the catalog pictured near the beginning of this article. 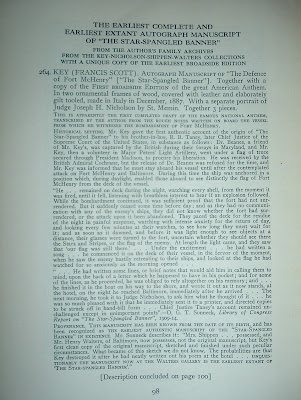 As an afterword to the history of Key's manuscript and its passage through the American Art Association - Anderson Galleries' auction catalog, for which I have presented my copy here, it's interesting to note that it wasn't until March 3, 1931 that the Star-Spangled Banner became the national anthem of the United States. One-hundred and sixteen years after it was first written, President Herbert Hoover signed an act into law. In celebration of July 4th, many patriotic songs will be sung and played by orchestras across America, but Francis Scott Key's inspired verse will be at the head of that musical parade.