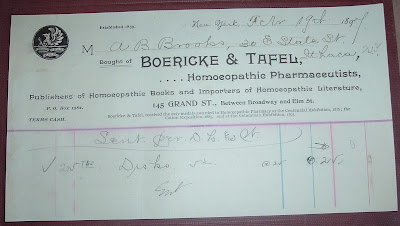 Boericke & Tafel is among the oldest homeopathy companies in the world and a pioneer of homeopathy in America.

The company got started in 1853 with the manufacture and sales of homeopathy products. A decade later, the company was firmly rooted in major cities across the country. They also added publisher and bookseller to their business description.

I can't offer any information about the literature they imported for their books sales, but their own published books (more than a hundred titles, comprised their catalog) accounted for about eighty-five percent of all homeopathic books published in the United States. Some of these titles included The American Homeopathic Pharmacopoeia, The Sixth Edition of Hahnemann's Organon of Medicine (translated by William Boericke), and Boericke's Materia Medica with Repertory, which, according to Homeopathe International, "is today the standard U.S. materia medica and an integral part of most homeopathic computer repertorization programs." That bit of Boericke & Tafel company history comes from Sylvain Cazalet, whose articles, history, and images are a great Internet resource on the subject.

The company rode a wave of popularity for homeopathy in the 19th century. The 20th century saw a decline in that popularity, but Boericke & Tafel survived and is still kicking in the 21st century as a brand of Schwabe Pharmaceuticals of Germany.