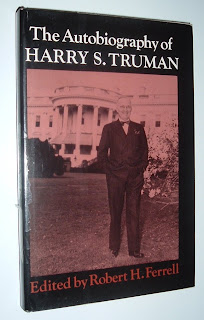 Tucked inside the front cover of a copy of The Autobiography of Harry S. Truman, edited by Robert H. Ferrell (Colorado Associated University Press, 1980), I found a presentation note from the Harry S. Truman Library Institute. The implicit invitation it contained led me to some of Truman's private thoughts, which reinforced the slogan often associated with him:" "Give 'em Hell, Harry!"

The letter implies the book was a complimentary copy for another library or institute of higher learning and invites the reader to promote and encourage public understanding of the Truman period. 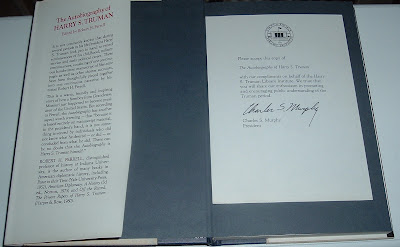 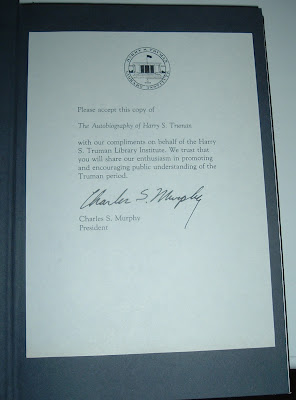 At the Harry S. Truman Library and Museum site, I clicked on the Research link and found under Special Features a link to Truman's 1947 Diary. Old diaries can be interesting to peruse, especially for high profile individuals such as ex-presidents. I got a lot more candor than I bargained for while reading Truman's diary.

Below are some excerpts from the diary he kept that year.

Mrs. Roosevelt came in at 3 P.M. to assure me that Jimmy & Elliott had nothing against me and intended no disparagement of me in their recent non-edited remarks. Said she was for me. Said she didn't like Byrnes and was sure he was not reporting Elliott correctly. Said Byrnes was always for Byrnes and no one else. I wonder! He's been loyal to me[.] In the Senate he gave me my first small appropriation, which started the Special Committee to investigate the National Defense Program on its way. He'd probably have done me a favor if he'd refused to give it.

Maybe there was something on both sides in this situation. It is a pity a great man has to have progeny! Look at Churchill's. Remember Lincoln's and Grant's. Even in collateral branches Washington's wasn't so good-and Teddy Roosevelt's are terrible.

Truman makes note of a heart condition in his March 7th entry and scoffs, "So What!

"Left Mexico City at 6 A.M. Everyone[,] President, Cabinet, half the City to see me off.

Doc tell's [sic] me I have Cardiac Asthma! Ain[']t that hell.
Well it makes no diff[erence,] will go on as before. I've sworn him to secrecy! So What!

Excerpt from July 4th after a visit to Jefferson's home, Monticello:

Mrs. Astor-Lady Astor came to the car just before we started from Monticello to say to me that she liked my policies as President but that she thought I had become rather too much "Yankee."

I couldn't help telling her that my purported "Yankee" tendencies were not half so bad as her ultra conservative British leanings. She almost had a stroke.

July 23rd, Truman comments on the departure of Secretray of War Patterson and his wife, as well as his dislike for the wife of his replacement:

How we'll miss Mrs. Patterson! as well as the Sec[retary] of War. Looks as if we've lost a grand, honest man & wife of the same caliber and have gained a good man and a baby talking, henna haired lady. She went to school with Claire Booth Luce-too bad I'd say. Cabinet women are a problem. I'll write a book on it some day.

I've saved the most surprising (shocking) for last, a July 21st anti-semitic rant after a conversation with Henry Morgenthau, concerning a ship in Palestine:

The Jews, I find are very, very selfish. They care not how many Estonians, Latvians, Finns, Poles, Yugoslavs or Greeks get murdered or mistreated as D[isplaced] P[ersons] as long as the Jews get special treatment. Yet when they have power, physical, financial or political neither Hitler nor Stalin has anything on them for cruelty or mistreatment to the under dog. Put an underdog on top and it makes no difference whether his name is Russian, Jewish, Negro, Management, Labor, Mormon, Baptist he goes haywire. I've found very, very few who remember their past condition when prosperity comes.

Wow! When the diary was discovered in 2003 and made available to the public online, any media coverage slipped by me. I don't remember hearing anything about it. I wondered how others viewed the July 21st entry and how it might affect Truman's legacy. I found a couple of points of view on the matter, one of which defends Truman against anti-semitism:

There are many more for researchers and historians to debate. I don't know that I would have ever had any knowledge of Truman's diary and its contents had I not found a letter from his Presidential Library tucked inside his autobiography. More evidence of ephemera's collectibility and importance in discovering history.