August 25, 2010
My last post was about a Philadelphia bookseller, John Penington & Son, whose 1875 trade card I had recently acquired. A few months ago, I had purchased a copy of Forty Years Among the Old Booksellers of Philadelphia with Biographical and Bibliographical Remarks, by W. Brotherhead (published by A.P. Brotherhead, Philadelphia, 1891). 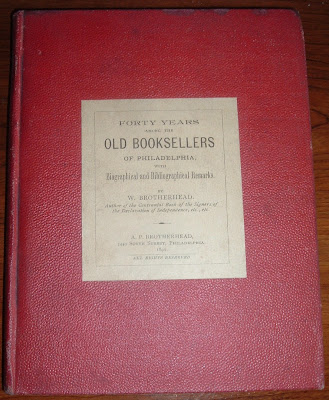 Affixed to the book's endpapers, I found a couple of paper items I like to feature here occasionally--a bookplate and a bookseller's ticket, or label.

Inside the book's front cover (front pastedown), I see this book formerly was a volume in the private library of H.S. Pickering, so stated by his straightforward, no-frills bookplate: 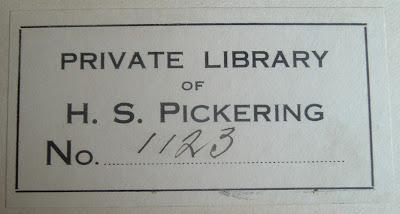 Of H.S. Pickering and books or libraries there is nothing to be found through repeated searches. There was a man by that name who wrote a book about covalent something or other, but I doubt that was my Pickering with the bookplate. My Pickering would be more appropriate as a relation to the Pickering of the Pickering & Chatto antiquarian booksellers, but I can't find any connection there.

If not associated with the bookseller, perhaps he was a committee member for the The English Association, for which there was an H.S. Pickering.

Venturing farther away from the book world, maybe this H.S. Pickering was the wealthy Bostonian, Harry Pickering (middle initial unknown), of Harry's Bar fame in Italy (and around the world now). Was Harry a bibliophile who picked up a second-hand copy of Brotherhead's book (he hadn't been born yet when it was published)? That would make for a good story and be of more general interest.

For the "H" in H.S. Pickering, I've substituted Henry, Harold, Harry, Horton, on and on through Hubert, Hugh, and Humphrey to no avail. Names turn up, but nothing associated with bookselling or book collecting or libraries. Whomever the elusive H.S. was, he was interested in old Philadelphia booksellers and had a structured library to the point that his books contained a bookplate identifying the book by a number.

Additional provenance on this book was found on the rear endpapers in the form of a bookseller ticket or label affixed to the rear pastedown. McGirr's State House Book Shop of Philadelphia once had this book in its possession and sold it somewhere along the line. 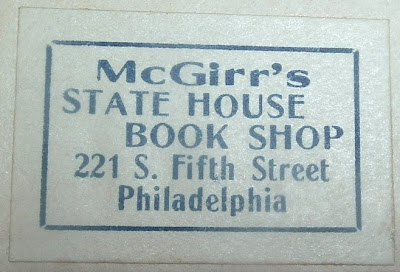 As McGirr's is not listed in Brotherhead's book about booksellers in Philadelphia, I assume that the book shop did not exist prior to 1891. I have found references to around 1917. Beyond that, I know virtually nothing about the book shop's history, but a bit of information on the proprietor follows.

I first became familiar with Newman F. McGirr of McGirr's State House Book Shop last year when researching a post card from McGirr's. That post is HERE, but an extracted passage from that post offers the following on McGirr:


McGirr appears to have been, in addition to a bookseller, a writer, editor, and publisher (thus my comparison to fellow Philadelphian Franklin). I can find several references to works of folklore, particularly in Pennsylvania, that he was involved with. And more particularly, he had a special interest in music history of the region. I could also venture a guess that he was somewhat of a songcatcher, a Lomax contemporary, who had at one time his own record label.

I did find mention of a book he wrote, which I have to get for my library: Experiences of a Pennsylvanian with Old Books, Bibliophiles and Old Records. I can't find anything more than the title and author (McGirr) and it seems to be long out-of-print and unavailable.