August 03, 2010
Think of Rand McNally and you think of maps and road atlases. But they got their start in the 1850s as printers and publishers of newspapers and railroad ephemera such as tickets and timetables. 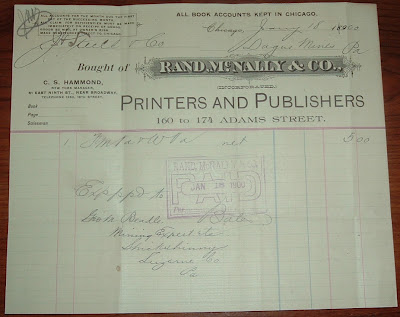 Their company name reflected two individuals, their names separated by a comma, as shown in the billhead above, dated 1900 (New York office). Research into this billhead also revealed how a well-known American publisher adapted to adversity and changing times for more than a century to thrive in an increasingly competitive business environment.

William Rand started a small printing business in Chicago in 1856, offering his job printing services for a variety of items. A few years later, he hired Irish immigrant Andrew McNally to help with his growing business.

A Chicago newspaper, forerunner to the Chicago Tribune, hired both in 1859 to run their printing shop. A decade later, the pair had purchased the printing operations from the newspaper and struck out on their own.

But the company nearly lost everything in the Great Chicago Fire in 1871. They managed to rescue a couple of ticket printing machines and buried them in the ground several miles away to escape the intense heat. This saved the business and they were able to resume printing within days in a rented space.

The next year, 1872, Rand and McNally began turning their printing focus to the booming railroad industry in Chicago, for which they printed their first map in that year. Thus began their association with publishing maps and later educational materials.

Rand sold his interest in the business in 1899, but the company name remained intact and the McNally family continued running the business for nearly another century until Andrew McNally IV sold the company in 1997. By that time, the company name had become synonymous with maps and road atlases, which they developed along with the country's automobile industry and road travel.

From railroad tickets to their first road map in 1904, to atlases, book publishing, travel stores, and software products, it's interesting to see how Rand McNally strove to evolve with the changing times and their customers' needs.

Sources and more information at the following links: