October 01, 2010
During America's Civil War, Charles Carroll Soule of Boston joined the 44th Massachusetts Infantry Regiment to fight for the North. John W. Park, of prominent Southern heritage, joined the Confederate cause, signing up with the Regimental Staff of the 1st Georgia Reserves. It is doubtful that their paths ever crossed on the battlefield, but they did cross about a quarter-century later in a business transaction involving books. 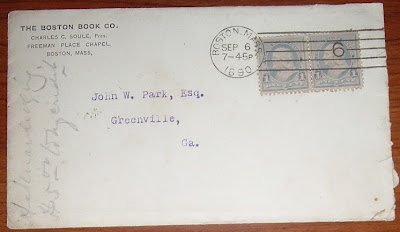 Charles C. Soule, a Harvard graduate, became a bookseller sometime after the war and was the proprietor of the Boston Book Company. John W. Park became a prominent lawyer and was one of the organizers of the Georgia Bar association and eventually served as its president. In those professional capacities, these two accomplished men would cross paths because of their chosen fields after the fields of battle. I have evidence of this in the correspondence below. 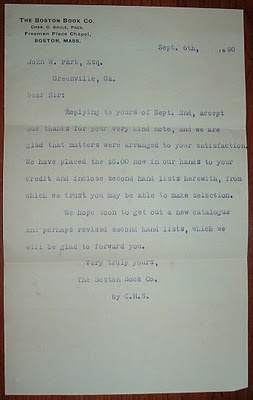 On September 6th, 1890, Soule wrote to Park about a credit to his account and enclosed a list of second-hand books from which he could choose a title or two. What kind of books did Soule sell that Park could have been interested in? As stated earlier, Park was a prominent lawyer, so it was no surprise to learn that Soule specialized in law books.

The Southern lawyer and the Northern bookseller had a business relationship to the extent that Mr. Park had an account with Mr. Soule's company. These former Civil War opponents had become businessmen conducting civil transactions with one another. Park needed certain law books and he found them in Boston from a former adversary in the War Between the States.

But Soule not only sold law books, he authored The Lawyer's Reference Manual of Law Books and Citations. He was highly regarded for his knowledge and views on law books and law publishing, as indicated in this letter to the American Law Reviews. No wonder John Park looked North for his law book needs.

Soule's professional interests extended to libraries as well. On that subject, Soule authored Library Rooms and Buildings and How to Plan a Library Building for Library Work. While not a professional librarian, Soule was active in the American Library Association, having become a member in 1870.

Beyond the business transaction of the bookseller Soule noted here, I found some interesting history from Soule's military service. This citation offers minimal biographical information, but does substantiate that he was indeed Captain of the 55th Massachusetts. In my research, I had run across a Charles C. Soule who authored a letter at the close of the Civil War to a Maj. General O.O. Howard concerning the chaos created between freed slaves and Southern planters. A reference to his position of Captain of the 55th Massachusetts, a black regiment, confirmed this was this same Charles C. Soule who would become author-publisher-bookseller Soule.

His accomplishments extended beyond the world of books and into equality and civil law in the wake of emancipation, as can be seen in Soule's correspondence with Maj. General Howard, found at the University of Maryland’s Department of History project: Freedmen & Southern Society Project.

During the war, with the preservation of the United States at stake, it is interesting to ponder if either Charles C. Soule or John W. Park could have foreseen that out of a Civil War there could evolve a civil business relationship between two opponents in the arenas of culture, geography, and military allegiance. Of course, history records that such relationships did evolve, as evidenced by major documents and even little bits of ephemera such as a note between two men about books.