November 22, 2010
Here's an ad cover from 1890 for a Lancster, Pennsylvnia bookseller who used a little creativity with the advertising on the envelope. 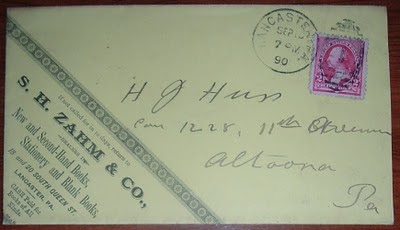 Most ad covers, or postal covers, contain a standard return address in the upper left corner that includes the essential business information of name and address (example). Some add a logo or cameo (example) to catch attention. Some add to these things information about their business or inventory (example). And some have stretched their creativity to include illustration of the cover's front, back, or both (example).

S.H. Zahm combined some of the above with a twist that is an effective eye-catching design. He chose to use a triangular shape in the lower-left portion of the cover to disseminate business information down to the point of the lower-left corner. It's finished with a decorative border. 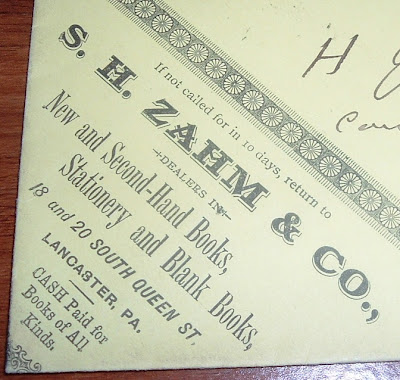 Zahm lived from 1840 to 1892, a short 52 years by today's standards. He appears to have been an accomplished bookman and antiquarian with a successful career and a personal life beset with the tragedy of losing his wife and children to untimely deaths. Publisher's Weekly ran his obituary in their February 11, 1893 issue, which is copied below:

Samuel Hensel Zahm, head of the bookselling firm of S. H. Zahm & Co., of Lancaster, Pa.. died at Tampa, Fla., on February 5. Mr. Zahm had gone to Florida for his health on December 28 with his wife; but be was not supposed to be in a critical condition and his death was a severe shock to his relatives and friends. He was born in Lancaster, Pa., March 9, 1840. In 1875, after having been engaged in the book business in Kansas City and as travelling salesman for a Pittsburg firm, he returned to his native town and with William Reichenbach opened a small second-hand bookstore. His partner died in 1878 and Mr. Zahm formed a partnership with Samuel Auxer, under the firm-name of S. H. Zahm & Co. At that time his store was removed to 18 and 20 S Queen St., where the firm has since carried on a flourishing business. Mr. Zahm was active in municipal affairs, having been a member of the common council and the board of health. He was a charter member of the Lancaster County Historical Society and of the Pennsylvania German Society, and belonged to several other local and general organizations. He was a student and scientist, well versed in archaeology, his collection of stone implements and relics of American aborigines being a remarkably fine one, numbering many thousands of specimens. As an antiquarian and bibliophile he was regarded as an authority, being particularly well posted on Americana. He was prominently identified with the Methodist Episcopal Church of Lancaster. Mr. Zahm was twice married, his first wife and their two children having died several years ago. His second wife survives him.