The Booksellers' League of New York 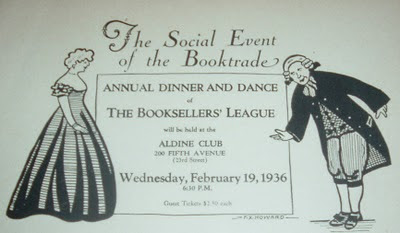 An early booksellers' association in America was The Booksellers' League of New York, founded in 1895. Princeton University Library has a collection of related ephemera in their Department of Rare Books and Special Collections, Manuscripts Division. I have one item in my collection, a copy of which may also exist in those archives: An announcement for the 1936 Annual Dinner and Dance of the Booksellers' League at the Aldine Club.

Thomas Wolf was a featured speaker at the dinner that evening, which gives perspective to the level of quality and character of the organization. 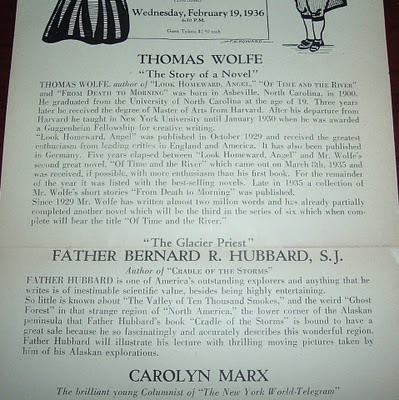 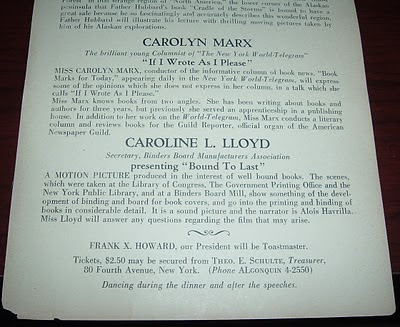 As my surgically-repaired (last week) right arm is currently useless, and left-handed typing is s-l-o-w, I'll just include here a couple of Booksellers' League history excerpts from two reliable sources.

The Princeton Library site offers the following history of the league in support of its collection:

Founded in 1895, the Booksellers' League of New York was an organization aimed at promoting a professional and collaborative spirit among members of the book trade. Its founding officers were J. N. Wing of Charles Scribner's Sons, A. Growoll of Publishers' Weekly, and C. E. Savage, of G. P. Putnam's Sons. The League organized social events related to the profession, most notably monthly dinners with invited speakers and an annual banquet. It also sponsored an employment bureau and lectures related to the interests of book professionals. Originally a men's-only club, the League first admitted women in 1949.

Bookseller Rulon-Miller's catalog number 141, offers a listing of league ephemera and a nice bit of history that complements what I found on the Princeton site.

307. BOOKSELLERS’ LEAGUE. Archive. New York: 1895–1950s... This archive is ex-Aaron Mendoza (of the Isaac Mendoza Book Co., NYC, and President of the League in 1944–45), and thence ex-Jacob Chernofsky, editor of AB Bookman’s Weekly. Includes 5 small quarto notebooks containing the minutes and expenditures of the League, covering the year of the League’s founding in 1895 to 1930, in various hands, and with numerous printed and in-house mimeograph slips pasted in. Among the presidents of the League during these years were Alfred Growoll, B. W. Huebsch, R. E. Sherwood, and Arthur Brentano, and among the secretaries recording the minutes were Charles A. Burkhardt, A. Growell, W. H. Parker, E. W. Johnson, Francis Gilman, A. G. Seiler, William S. McKeachie, A. W. Wessels, and others, pro tem.

The Booksellers’ League was the first organization of its kind in the United States. Not only did the League seek to develop a true spirit of fraternity and mutual help among booksellers and publishers, it also sponsored an Employment Bureau, a Booksellers’ School, and a lecture series. The list of those involved in the Booksellers’ League covers virtually every major publishing firm in the New York area (Harpers, Dutton, Putnam, Knopf, Fleming Revell, B. W. Huebsch, Edward Burt, W. R. Barnes, and many of these names are punctuated by the names of authors who attended meetings and gave lectures, including Sherwood Anderson, Zane Gray, Robert Sherwood, Alfred Noyes, Joseph C. Lincoln, Ellis Parker Butler, Bennet Cerf, and others.

A treasure trove of the New York publishing and bookselling scene during its heyday.

And I was pleased to find a little piece of ephemeral treasure and learn about this pioneering and venerable organization for bibliophiles.