Any bookseller in Leipzig will do

More than a hundred years ago, 1898 to be exact, California publisher Gilbert Wyman, of Fruit Vale (Fruitvale) in Alameda County, sent a letter addressed simply To Any Bookseller in Leipsic (sic) Germany. The cover, with 1898 postmark, is shown below. 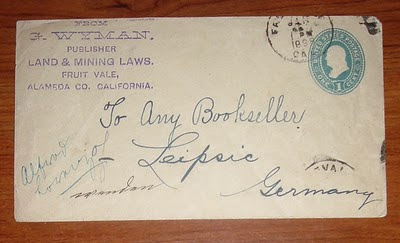 I can find only one book published by G. Wyman: Public Land and Mining Laws of Alaska, The Northwest Territory, and the Province of British Columbia, compiled by Wyman, and it was published in 1898, the year this letter went out in search of any bookseller who might be interested in stocking a few copies of, presumably, this book.

Wyman was an attorney, according to an 1897 copy of California Attorneys Directory. Perhaps as a publisher, Wyman was a "one hit wonder" with regards to actually getting a book into print. And "hit" may be stretching it quite a bit with this title. I would assume Wyman had a limited market for this book on mining laws in the northwest region of the North American continent. Maybe not, though--the Alaska gold rush was on by 1898. Apparently, Wyman sought to expand that market overseas. A simple strategy unfolds as I examine this empty envelope: Prepare a form letter advertising the book, send it to Any Bookseller in a selected city, or cities, in the world, and hope the postmaster makes a good selection for you. Or any selection.

Whether there were other cities in this marketing strategy, I'll never know, but this letter did find its way to Leipzig, as evidenced by a German language stamp on the back of the envelope: Empfänger bei dar Buchhändler best-Nanstalt in Leipzig nicht ermittelt. Under that is a name and what looks like the date 22/198 (22 January 1898?). I'm not certain of the translation, but, keying on a few words, I believe it has something to do with a bookseller's receipt of the letter not being determined. What that means exactly, I'm not entirely sure. 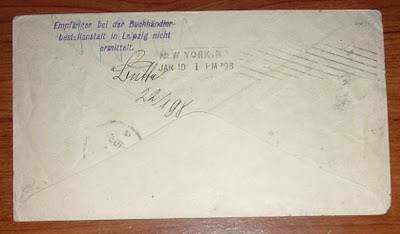 But did Wyman's letter ever land in the hands of a bookseller in Leipzig? Perhaps the Post Office in Leipzig could not make the determination as to which bookseller should receive the letter. Perhaps it was forwarded to an agency of some sort that dealt with booksellers for them to make the determination. Whatever the case, the letter does not appear to have been returned to Wyman back in California. At least there are no indicators of such action on the envelope anywhere.

Why Leipzig of all the cities in the world in which Wyman could have peddled his book? And why would the postmaster in Leipzig have a stamp for letters not addressed to a specific bookseller? 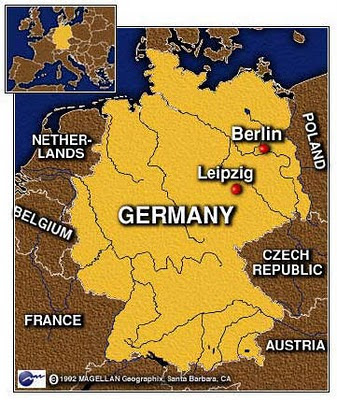 Map found at Finswimmer Magazine online.
An excerpt from the Official Directory of the German Book Trade , 1906 (close enough to Wyman's posted letter), as reported in The Publishers' Circular and Booksellers' Record, Volume 84, speaks to why Wyman may have chosen this German city to sell his book and perhaps garner interest in North America's northwest gold mining country.

Quoting from that excerpt:

It may not be generally known that in Germany bookshops, as well as publishing houses, are not limited to the principal towns but are scattered all over the empire, and often found in very small places; to order all the books direct would be too expensive, thus the supply has to be specially organised.

The centre of the book trade in general is Leipzig; of 2,994 principal German publishers 2,886 keep stock there. Every publisher and every bookseller has an agent in this town with whom all business transactions are carried out. Booksellers, as a rule, send their orders to their agent in Leipzig, who transfers them to the corresponding publishers' agents in that city. The books, which otherwise would have to be posted direct in as many small parcels, are thus collected in Leipzig and sent to the different booksellers in one lot.

As already stated, the centre for the universal book trade is Leipzig, but in order to facilitate and accelerate business many publishers keep stock in other transit places and trade centres as well. According to the statistics in the new directory there are 10 booksellers' agencies in Berlin, 18 in Budapest, 117 in Leipzig, 5 in Prague, 11 in Stuttgart, 30 in Vienna, and 6 in Zurich. Some other figures may be of interest as well. Germany contains 348 publishing houses devoted solely to art publications, and 419 to music ; 147 shops specialise in the sale of new books, and 515 in the sale of music; 224 sell only second-hand books, the number of second-hand dealers who sell other books as well amounts to 1,640. There are 1,078 lending libraries conducted by booksellers, and 396 reading clubs. The number of booksellers who also sell objects of art, or music, or have a lending library &c. of any kind, or are also publishers, amounts to 6,600.

The directory, which is published every year, is drawn up in a clear and concise manner, and the methods by which it is kept up to date are very interesting and practical.

The first part, the directory proper, contains the name of the firm, of its owner, and the date on which he took possession, also the postal and telegraphic addresses. It further gives the names of his agents in the different towns, and generally, in the case of a publisher, his business rules and terms, or, if a bookseller, the conditions upon which he accepts new books on sale. It states besides whether he is a member of the Borsenverein, the chief association, and how far he acknowledges the trade rules for new or secondhand books &c.

The numbers tell quite a story. Leipzig was indeed the "universal centre" of the book trade, at least in Europe. Back in California, Wyman probably knew all this. Thus, his letter to Any Bookseller in Leipzig. But the rules cited in the directory extract above indicate a well regulated industry, one in which the Post Office could not call the shots on forwarding Wyman's letter.

Further support of Leipzig's long and important history with publishing and bookselling can be seen through the lens of the city's book fair heritage. The German history site Exulanten states on their page about book fairs:

By the 18th century, Leipzig had even become the center for trade with Polish and English goods and was known as 'the marketplace of all Europe'... Leipzig became the main German fair for books and consumer-goods. A technical fairground was opened in 1920 and by 1930 it drew visitors and exhibitors from 45 countries. By 1940, the fair included 19 more pavilions. Throughout the centuries, a whole book district developed in Leipzig complete with book museums. The Leipzig fair, which had occurred twice a year for seven centuries, was mostly destroyed by Allied bombs in World War Two along with an estimated 50,000 books, many of them rare, from the historic book district.

Not having studied in depth the history of the German book trade, I can only speculate on the factors involved in Wyman's very casual solicitation of his book. What I deduce from all this is that Wyman knew of Leipzig's reputation as a publishing and bookselling hub in Europe and with an overwhelming number of booksellers in that city his Any Bookseller address was sure to find a sales outlet in the old country. And with the Klondike Gold Rush in full swing, the lure of gold would create an interest in his book about the associated land and mining laws. What Wyman may not have known or fully appreciated was the highly structured organization of the book trade in Leipzig.

But the letter appears to have found its way to a bookseller whose name appears on the front of the envelope. 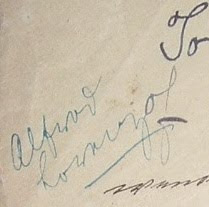 At first, I thought this name was Alfred Lorenz, but I cant find a Leipzig bookseller by that name. In German-Austrian music circles, yes, but not in a Leipzig book shop. Trying a variety of spellings, I happened upon Alfred Lorentz, with a "t," who was a bookseller in Leipzig.

That great resource, Seven Roads Gallery of Book Trade Labels had one of Lorentz's bookseller labels. Of course. I should always know to look there first.

I can only assume that someone in the chain of command from the Post Office to trade association to publisher to bookseller agent (or some variance thereof) thought of Lorentz, but misspelled his name. Must have been thinking of the musical Alfred. Nonetheless, Alfred Lorentz probably got to read a letter from a California lawyer who had published a book he wanted to sell to any bookseller of Leipzig. I wonder how many copies Alfred ordered?