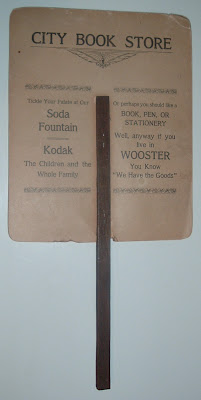 I received my quarterly issue of Ephemera News (a publication of the Ephemera Society of America) yesterday and one article in particular got my attention: The Appeal of a Fan, by Moira F. Harris.

She writes about a hand fan she purchased at an estate sale and muses on the various reasons one might collect such a fan. There are collectors of hand fans and collectors of ephemera, including hand fans, with connections to various themes of interest, such as images, advertisements, or locales to name some. This article reminded me of a hand fan I have in my collection of ephemera related to book-related businesses.

I don't collect hand fans, but this one found its way into my bibliophemera collection for the obvious reason of its connection to an old book store.

The City Book Store in the city of Wooster, state unnamed, sold or gave these fans away probably around the turn of the century (19th to 20th) judging by the photo of the little girl and her books on one side of the fan. The other side features information about the book store and its various products.

You could find more than just books at City Book Store, which I'm reasonably certain is in Wooster, Ohio (the only Wooster I can find). Pens and stationery have long been associated with book store inventory, but the soda fountain and Kodak seem to run a bit outside the typical attractions. However, the ads for these commodities help date this book store fan.

Soda fountains have been around since the late 1800s and their heyday was in the early decades of the twentieth century. They are usually associated with drug stores, but the City Book Store in Wooster advertised one in its establishment. 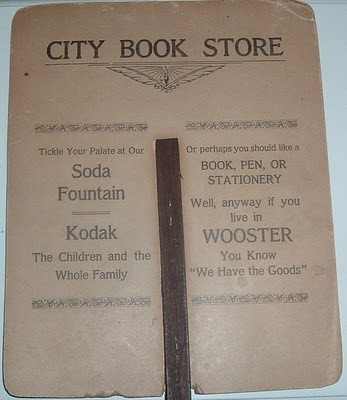 It also advertised the Kodak--for the children and the whole family. Kodak cameras came along in the 1880s along with soda fountains--a coincidental pairing for the City Book Store. In the book American Icons (Greenwood Publishing Group, 2006), a chapter on Kodak cameras by Richard N. Masteller brings into focus the importance George Eastman's "toy," so ubiquitous as to be found even in a book store in Wooster, Ohio as well as a drug store or department store in Any City, Any State, in America:

It brought popular, personal photography to the masses by enabling everyone--even a child--to become his or her own image-maker. To promote amateur photography, Eastman Kodak marketed its invention as a toy. While production figures increased each year during the 1890s, it was the Brownie camera of 1900, marketed explicitly to children and their parents, that accelerated and assured the democratization of photography.

Perhaps the Kodak on the City Book Store fan was a Brownie, as the slogan might suggest. The book store appears to have taken a page out of the Eastman Kodak marketing book with the advertising slogan "The Children and the Whole Family." I guess this book store in Wooster did its part for the "democratization of photography."

Other than a place in the store's name, and being lumped in with pens and stationery, books in the City Book Store appear to be lacking in prominence against the competition of popular culture of the day. More than a hundred years later, they're still battling popular culture for acceptance, but they continue to hang in there and thrive.