A few minutes with Andy Rooney... at the Mayfair Bookshop 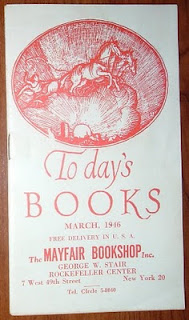 A chariot driver and team of horses leap across the landscape (Manhattan?). Following that graphic, the title, Today's Books, jumps out at you on the cover of this little bookshop catalog. Today is March 1946 and Today's Books could be purchased at the Mayfair Bookshop, owned by George W. Stair in New York City at 7 West 49th Street--Rockefeller Center.

Thumbing through the catalog for items of interest sixty-five years ago, an ad for this book caught my eye: The Story of the Stars and Stripes: A Paper for Joe, by Bud Hutton and Andy Rooney. Yes, that Andy Rooney--the 60 Minutes journalist and author. You could also call him an ex-college football player (Colgate University) and a World War II veteran. And he was already a veteran author in 1946, having written his first book while serving in Europe in 1944. 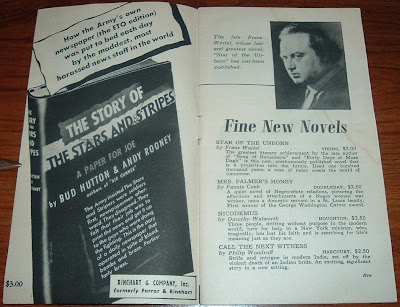 Rooney was drafted into the Army in 1941. In 1942 he began reporting for the military newspaper The Stars and Stripes in London. The following year, 1943, he and five other correspondents flew with the Eighth Air Force on the first American bombing raid over Germany. Rooney's first book (also co-authored) was Air Gunner (Farrar & Rinehart, 1944), about his observations of the Eighth Air Force during his time with them.

Rooney went to work for CBS in 1949 and did a tremendous amount of writing for them in the form of essays, scripts and series. I can't find another book he published until 1981's bestseller, A Few Minutes with Andy Rooney (Atheneum, 1981), which launched a run of some 15 books to date. These are the books we associate today with Andy Rooney.

But during and immediately following World War II, a young pacifist turned soldier cut his journalistic teeth and parlayed his wartime reporting experiences into his first two books. You could probably find both of them at the Mayfair Bookshop in Manhattan back in 1946.

And by the way, that young soldier/author is 92 years old today.