February 09, 2011
An odd grouping for a post on this blog, eh? Perhaps it deviates a bit from the usual fare, but there is a book ephemera tie-in. 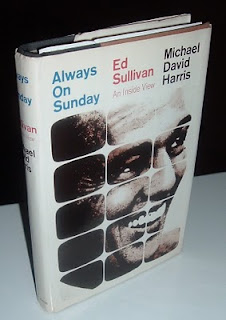 Mrs. Paul's Kitchens gave away copies of Michael David Harris' book, Always on Sunday: Ed Sullivan, an Inside View (Meredith Press, 1968) to promote an October 17, 1971 CBS special on the Ed Sullivan years. Sullivan's show had been off the air since June of that year.

Inside the book, I found the letter from Mrs. Paul's Kitchens detailing all this, while also plugging their fish sticks and related products. I remember both the Ed Sullivan Show and eating Mrs. Paul's Fish Sticks when I was growing up in the 1960s, so this had a good bit of nostalgic appeal to me (still enjoy old Sullivan clips, don't like the fish sticks!).

In addition to the letter explaining the reason for the gift book, there was a presentation bookplate affixed to the front free endpaper: Compliments of Mrs. Paul's Kitchens, Inc. Now there's a rarity for bookplate collectors! 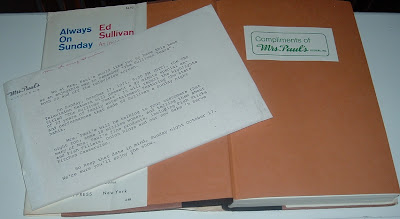 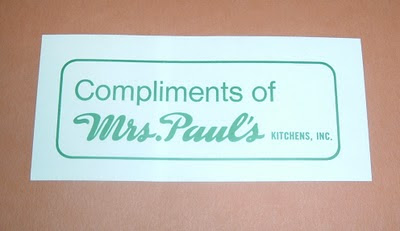 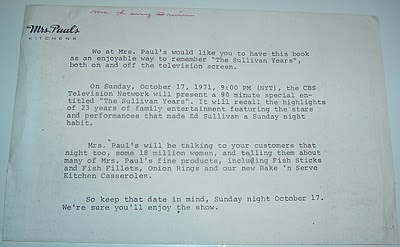 For anyone who remembers watching the Ed Sullivan Show, this book would bring back more than a few memories, I'm sure. In the photo section, I came across an act Sullivan booked that garnered a then-record 73 million viewers: The Beatles. They made their first appearance on the Ed Sullivan Show 47 years ago today--February 9, 1964. 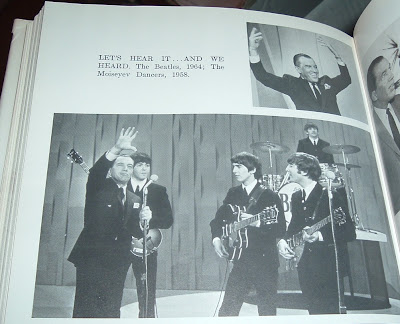 That appearance is summed up this way on Wikipedia:

Their first appearance on February 9 is considered a milestone in American pop culture and the beginning of the British Invasion in music. The broadcast drew an estimated 73 million viewers, at the time a record for US television, and was characterized by an audience composed largely of screaming hysterical teenage girls in tears. The Beatles followed Ed's show opening intro, performing "All My Loving", "Till There Was You" which featured the names of the group members superimposed on closeup shots, including the famous "Sorry girls, he's married:" caption on John Lennon, and "She Loves You". They returned later in the program to perform "I Saw Her Standing There" and "I Want to Hold Your Hand".

I just found this book and the promotional letter last night in a box in storage. I thought it would be fun to write a quick piece more for nostalgia's sake than anything significant to contribute to this blog, given the letter's tenuous connection to bibliophemera.

This morning, I heard a local newscaster comment about the Beatles making their first appearance on Ed Sullivan on this date. I checked it out and sure enough. What a coincidence! So I had to mention the Beatles here, too, and do it today on the anniversary of their first Ed Sullivan Show performance.

They got top billing on that show 47 years ago, but only third billing today in this blog post, behind Ed Sullivan and Mrs. Paul. Doesn't seem right, but that was the order of discovery.