February 13, 2011
Here's a 1904 billhead from Oregon, a state under-represented in my collection: 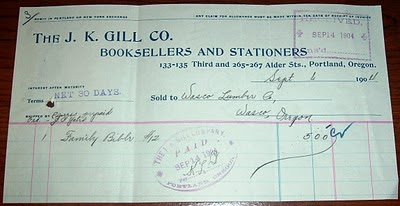 On the date shown, a family Bible was sold to a customer for $5. Small sales such as that belied the much greater business successes Gill had cultivated by the time this billhead received its paid stamp. 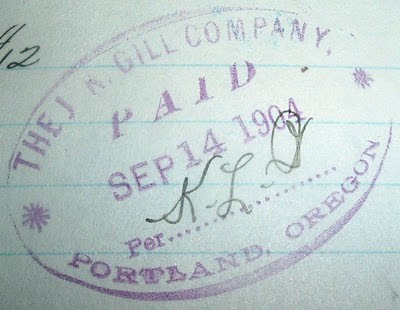 Information on Gill was readily available and more than I had expected to find. I soon learned why from Gill's Wikipedia page.

Gill started out in the bookselling business by marrying into it. A native from England, he had gone to Salem, Oregon in 1864 after living with his family in Massachusetts where they had emigrated. Married two years later, he began running the family's bookstore in Salem. In short order, he purchased the business, but soon sold it and headed for Portland where he entered into a new bookselling business with George A. Steel--Gill & Steel.

Gill expanded the business into stationery and office supplies and helped found the Columbia River Paper company as well as the Merchants National Bank. He also served on the boards of several local insurance companies. He lived a long, fruitful life, dying at age 90.

But Gill's business continued to grow after his death, and by 1990 it consisted of 63 stores selling books, stationery, office supplies, and art supplies across four states. That was as big as it got. Before the decade was out, the J.K. Gill Company was out of business. Competition from the big chain bookstores and office supply stores was, apparently, a major reason for their demise.

In researching J.K. Gill, I found the blog of the riverrun bookshop in Hastings-on-Hudson, New York, which offers more history of a personal nature from the 1950s. The blogger is Louisa Scioscia Stephens, daughter of riverrun's founder, Frank Scioscia and wife of riverrun's present owner. Both her parents worked at J.K. Gill's, if I have interpreted the blog posts on family history correctly.

Stephens provides some nice, descriptive memories of the Portland store and includes a picture from the rooftop of J.K. Gill's 10-story building in Portland in 1945. Her account is a welcome addition to the factual chronology of Gill and his business. Her writing allows one to walk through the store and experience its charms and attractions, from the layout to the people who worked there. I always enjoy finding this kind of personal tie-in to a piece I'm researching. It helps breathe a little life into a business's ephemeral representation.

Wrapping up, here's the face behind the business's origins, found on the Wikipedia site--J.K. Gill, circa 1911. 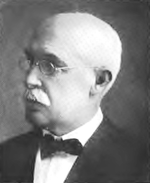