July 15, 2011
A while back, I wrote about Leipzig booksellers and touched on the role agents, or commissioners, played as middlemen between the booksellers and publishers in that city as well as most of Europe.

I recently acquired a postcard that depicts the place where these middlemen conducted their business. This is an image of the Buchhändlerbörse in Leipzig, circa 1910, which translates to The Booksellers' Exchange. 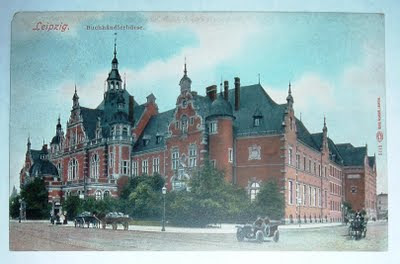 The back is divided and blank. A bookseller's handwritten note certainly would have enhanced the history depicted on the front side. 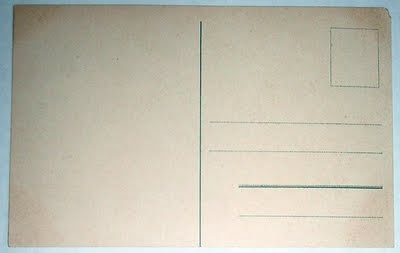 But the history is rich enough with the associated image of the Buchhändlerbörse on the front of the card. The German Publishers & Booksellers Association (Börsenverein des Deutschen Buchhandels) offers on their Web site a history of their organization and mentions the Buchhändlerbörse, which seems more commonly spelled today with two words--Buchhändler-Börse. 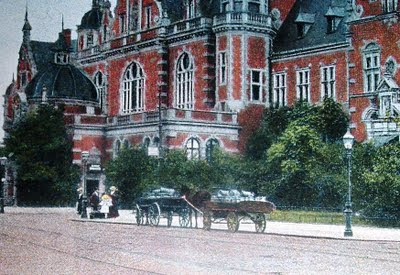 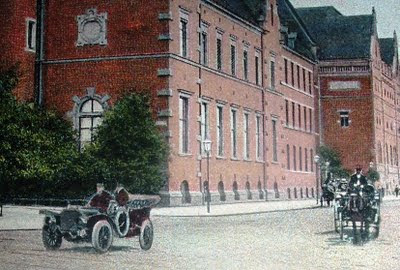 The Buchhändlerbörse  dates back to 1825. Heimsprudler's Gallery has an image of the building shown on the postcard under construction, circa 1888, on land donated by the city. From what I can gather, the building was apparently destroyed during World War II.The site is now occupied by a building of guest flats.

But what exactly was a Buchhändlerbörse, or booksellers' exchange? A chapter in the book, The Bookworm: An Illustrated Treasury of Old-Time Literature, Volume 5 (1892), adds to what I wrote about earlier and explains how a book got from an author to a reader and the need for a middelman, or commissioner, and, thus, the need for the Buchhändlerbörse:

The German book trade is divided into three branches—publishing, bookselling (which includes second-hand dealing), and commission business. Publishers are those who furnish the book, i.e., who obtain it from the author and cause it to be printed and circulated. Booksellers are those who sell to the public, and the "commissioner" is a sort of middleman who connects publishers and booksellers. Let us imagine that fifty books are ordered daily at a bookseller's, all of which are published by different firms. If the bookseller were in direct communication with the publishers he would daily have to write fifty letters, to pay their postage, to pay for the packet, and to despatch fifty remittances. This would necessitate labour and costs quite out of proportion to the trifling gain on each order. Now, since the greater portion of the German publishers reside at Leipzig, the custom has become instituted in the course of time that the intercourse between publishers and booksellers is conducted via Leipzig. The bookseller from whom a book is ordered writes the title and publisher upon a small memorandum, and sends this, together with a large number of similar little pieces of paper, to his commissioner in Leipzig. The latter, in his turn, distributes the memoranda to the commissioners of the respective publishers. The commissioners of the publishers send the memoranda to their respective firms, who then pack the books ordered and send them to their commissioners, who distribute them to the booksellers' commissioners, through whom they are finally sent in bales to the booksellers. If a bookseller wishes to pay a publisher on ordering a book, he requests his commissioner to pay the money to the commissioner of the publisher. As a rule, books are not paid for in cash, but during the fair that takes place at Easter. At this period, books that have not been sold are also returned by the booksellers to the publishers. Both the money and the returned goods go first to the bookseller's commissioner, and then, by the same process as the memoranda, find their way to the publishers.

So the Booksellers' Exchange was the place where commissioners worked on behalf of publishers and booksellers to take orders from booksellers and acquire books from publishers to fill those orders.

For an update on how business is conducted now between publishers and booksellers, I refer you back to the informative site of the German Publishers & Booksellers Association – Börsenverein des Deutschen Buchhandels.

One last note on the postcard... It was published by Louis Glaser (1881-1915) of Leipzig.  From the brief bio found at the link above:

A printer of souvenir books and postcards. He is best known for the Glaser Process in which a rich monochrome image could be produced by using at least five different litho stones, not for different colors but for different tonalities. This process was shared with the printer Charles Frey of Frankfort, Germany. He produced many other postcards as tinted halftones.