July 22, 2011
I usually write about a piece I've researched and can provide some history on, but this one is a stumper. Maybe someone out there will see this and have some information about it. 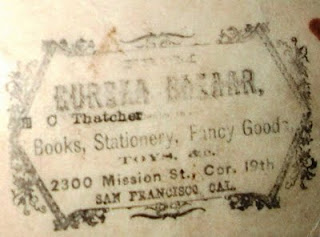 This is an old trade card for a San Francisco bookseller and stationer, E.C. Thatcher and his business with the colorful name, Eureka Bazaar. 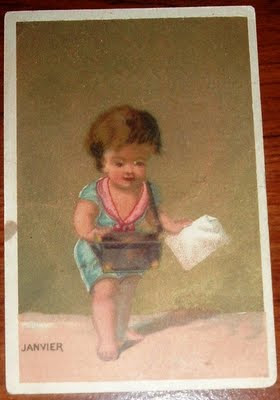 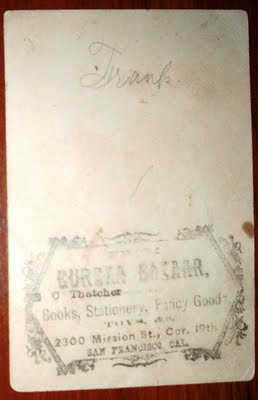 Looks like he sold a hodge-podge of items, not just books and stationery. With the shop name, proprietor's name, the address on Mission Street, you'd think I could turn up something on the Internet. Actually, I did get the following, which answers nothing and only creates more questions An 1888-89 Northern Pacific Coast Directory has this entry for Eureka Bazar (sic) at a different address in San Francisco (I presume, as the street address exists there today) with a different owner, a woman referred to as Mrs. Douglas:

Using all this information has produced not one iota of a clue about this old San Francisco bookseller, whose card I would date about 1880s. But perhaps the "C" in E.C. Thatcher stands for "Carter" and E.C. is the ancestor of the Carter Thatcher in San Francisco for whom the University of San Francisco Thatcher Gallery was named. Maybe... Just maybe...

I also hoped Janvier, noticeably displayed on the front of the card, might give me something to write about, but this apparently is the month of January, not an artist's name.

So from front to back, this trade card is one big mystery. No Eureka! moments yet.