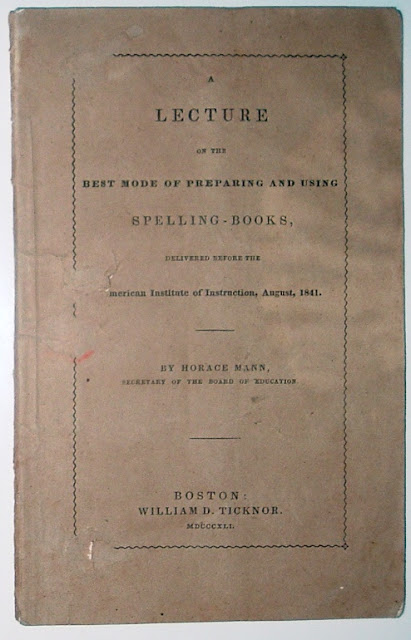 Lecture on the Best Mode of Preparing and Using Spelling-Books, Delivered Before the American Institute of Instruction, August 1841, by Horace Mann, Secretary of the Board of Education (Massachusetts), was published by William D. Ticknor in Boston, 1841. Here is what I have deduced from the printed copy at hand (and a little Internet research):

Sometime during the following year, 1842, Miss Joanna E. Dana was preparing to teach school in West Dedham, Massachusetts's. A friend or colleague sent her a printed copy of this lecture to help her with her spelling instruction. 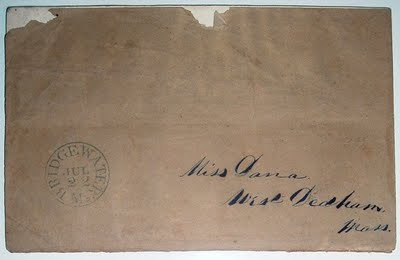 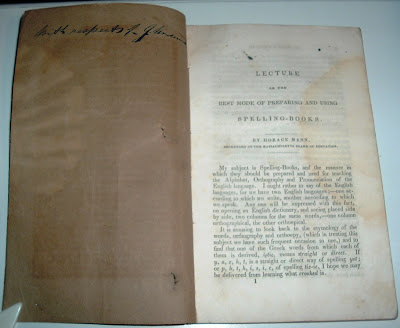 Miss Dana evidently read the lecture and, being the literary person and teacher that she was, corrected an error she found in Mr. Mann's discourse. On page 20, in the paragraph that contains "the knotted cords of the Mexicans," Miss Dana crossed out "Mexic" and wrote next to it in the margin "Peruvi." 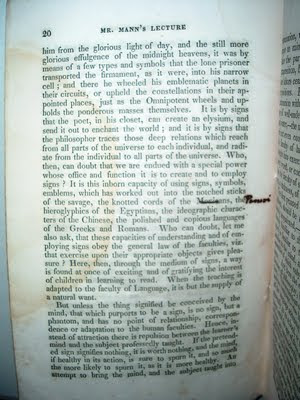 Being the editor I am, I checked Miss Dana's editing and sure enough she was absolutely correct about Peruvian knotted cords. And I am sticking to the assumption that she was indeed the editor of that passage, and not the person who gave her the pamphlet, as the ink color differs from that in the presentation on the inside cover.

How I deduced the above scenario is thanks to the "power" of the Internet and Google books. I was able to quickly find in the Dedham Historical Register a Miss Joanna E. Dana in West Dedham, who taught school there in 1842:


In 1842 Miss Joanna E. Dana instructed the West Dedham School twenty-two weeks. She was the daughter of Lemuel and Hannah (Eames) Dana, born in 1822, and was educated in the Westfield School when the higher branches were taught there to such an extent as to make it almost equal to an academy. She was married to Mr. John Mills of Needham, May 24, 1862. Mrs. Mills was a person of considerable literary enterprise, and wrote a volume of " Memories and Poems, " which was published in 1881. A few years before her death in 1893, she expressed to me the intention of writing some reminiscences of the West- field School. Had she done so, the record would have been valu- able and especially interesting to those who enjoyed its privileges.

The timing is right and I am confident this is the same Miss Dana who owned this pamphlet. That she became Mrs. Mills later is quite a coincidence for me, as I was instantly reminded of Miss Mills, my beloved second grade teacher.

Regarding my Miss Mills, I learned sometime back that she lived just a few miles from where I presently reside. I was thrilled to think I might run into her again after forty-something years. When that didn't happen, I wrote her a letter that included memories of my first creative writings, her praise and encouragement (that means a lot to an eight-year-old!), and first books I checked out of the library in her class (I have copies of them now in my collection). I mentioned I hoped to see her again and that got me an invitation to her home because, sadly, she was gravely ill and confined there. But she was gracious enough to visit with me, a stranger really, for about 10 or 15 minutes. And now I have another memory of Miss Mills (who ceased being Miss Mills long ago, but will always be remembered that way by me).

I've had Miss Dana's pamphlet in my collection for the better part of a year, I'd guess, and just stumbled across it again this morning. I couldn't remember why exactly I had bought it, but started digging and Miss Dana became Mrs. Mills and reminded me of my own early education and my favorite teacher, Miss Mills.

Miss Dana seemed a diligent teacher interested in learning better ways to teach. The passage about her "literary enterprise" is bolstered by a couple of books I found that she wrote:

She apparently taught at West Dedham for just 22 weeks. I wonder if during that time, she benefited from the ideas in Horace Mann's lecture. And I wonder if she made a significant impression on a young mind, creating a lasting memory in the manner a special teacher influenced me long ago.

Dedicated to "Miss Mills" and all the wonderful teachers past and present (including my mom, of course, who also taught second grade) who inspired and continue to inspire their young students and create within them a foundation for continued learning and development throughout their lives. We owe them so much.