The Tides Book Shop in Sausalitio

July 18, 2011
On this date 46 years ago, July 18, 1965, a fire broke out in the building that housed the Tides Book Shop in Sausalito, California. The Associated Press wire photo below shows firefighters battling the upper-story blaze above the book shop, which resided below on the first floor. A crowd gathered to watch. 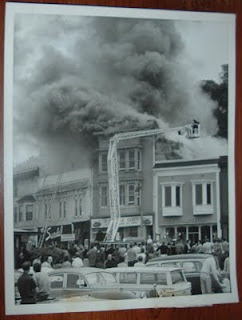 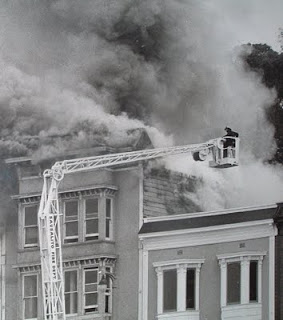 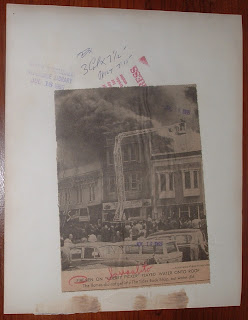 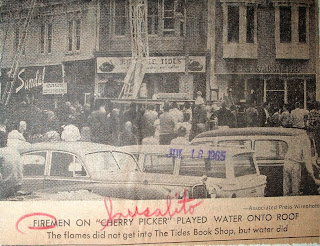 The newspaper clipping on the backside of the photo offers some assurance that the book shop did not burn, but it could not escape water damage from the firefighters' efforts to save the building. How much damage occurred is uncertain from the information available at present.

I acquired this photo to go along with another item I have from the Tides Book Shop. I certainly hope this is the only link the two have and that the shop's matches (not these) weren't in anyway implicated with the fire. That would have been too ironic a twist of fate! 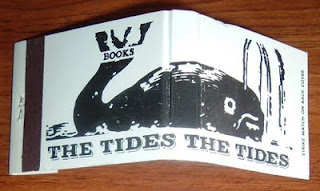 There's a good bit of history on The Tides, as it was known, in a local newspaper article reproduced and edited by Doris Berdahl: Sausalito Historical Society: The Tides. The author is unknown, but the article observes a change in ownership of the Tides and reflects on the shop's past, beginning with the day they opened for business on July 31, 1957.

Sally Brown Deskins, in a Prairie Schooner blog post,  references her grandfather, William H. Ryan, who, with co-founder Herb Beckman, started the Tides in 1957. The next year, Ryan was busy at work editing the new literary quarterly, Contact, which quickly became an important, avant garde magazine that was critically acclaimed. According to the Sausalito Historical Society article above, he set up his office upstairs above the book shop. It was short-lived, though, ending its run in 1962 after the publishers ran out of funds to keep it going.

However they did nurture the Tides and keep it going through the 1960s to 1972 when it was sold. The name stayed the same, but the shop changed to suit the new owners' philosophy of what a book shop should be.

Later in the decade, it would change hands again and this time the name changed with it to Upstart Crow and Co., which evolved into a nine-store chain at one point, based out of Berkeley. A 1987 Los Angeles Times article (Mary Galante, June 23) reports the chain was reduced to a single store by that time and it was nowhere near Sausalito. San Diego's Seaport Village was clinging to the remnants of a lineal descendant of the Tides. The trail goes cold at this point and I can only assume that the book shop succumbed to the dominance of big chain bookstores by the 1990s.


But the spirit, so to speak, of the original Tides lives on in another California town north of Sausalito--Mill Valley.

Mary Beckman, wife of the Tides co-founder Herb Beckman, became the book shop's first employee, stayed with into the 1970s, and seems to have been involved with books in one capacity or another ever since, according to a reprint of the October 16-22, 2003 issue of the North Bay Bohemian.

After a divorce, she moved on (Herb kept the Tides), working for other booksellers, remarried, and in 1987 started the Depot Bookstore in Mill Valley with her husband Bill Turnbull (co-founder of North Point Press). The Depot Bookstore was featured in the book, The Art of the Bookstore: The Bookstore Paintings of Gibbs M. Smith.

As an important literary and cultural center for the area, and on the periphery of San Francisco and its iconic status from the Beat Generation of the 1950s through the 1960s counterculture and beyond, it's likely a good number of artists from those eras wandered in and out of the Tides. But at least one literary icon, I've learned, actually worked there. Raymond Carver.

In Raymond Carver: An Oral Biography, by Sam Halpert (University of Iowa Press, 1995), Halpert writes that Ray Carver, broke and desperate for money, as well as in the throes of alcoholism, took a job at the Tides in Sausalito. It only lasted two weeks. During that time, he spent his earnings on books he found at the store.


The original owners of the Tides were likely gone by the time Ray Carver showed up looking for work. But the bookselling learned and cultivated at the Tides Book Shop a half-century ago, emerged like a Phoenix from literal fire and the figurative fires of changing times and tastes, as well as fierce competition from the big chain booksellers and the Internet. It continues to adapt and thrive in Mill Valley, up the road a ways. 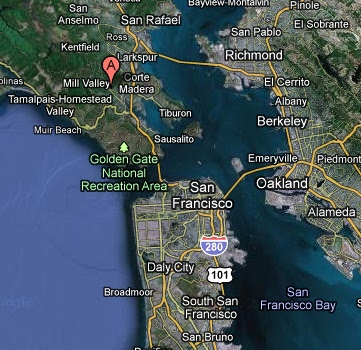