An Allentown bookseller's cup of tea 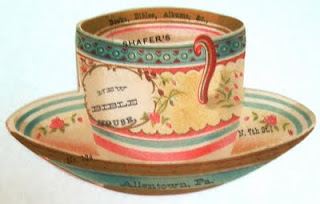 Carrying on with the theme of the previous post (die-cut trade cards for booksellers), here is a trade card for an Allentown, Pennsylvania (nod to Antiquarian Holographica) bookseller--Shafer's New Bible House, which sold Bibles, of course, but also a wide variety of books, as well as albums and stationery.

The cup-and-saucer shape of this trade card is an interesting choice for a bookseller. I wonder why not a book, as used quite effectively by a bookseller featured in the previous post about a Cooperstown bookseller? It may have had some metaphorical meaning to the shop owner or it may have just been eye-catching and readily available, or even one of a variety of cards used by the proprietor. Or maybe it was just his cup of tea or that of certain customers for whom he reserved this special card. Then again, most Victorian-era trade cards I've seen for booksellers and other businesses sport images that have nothing to do with the businesses they represent.

Mr. Shafer got a fine write-up in the 1881 publication, Manufacturing and mercantile resources of the Lehigh Valley, including historical sketches of the prominent towns: A descriptive, industrial and statistical review. Progress. Enterprise. Development.  (Industrial Publications Company of Philadelphia). His business on North 7th Street was viewed as one of the best of its kind in Allentown. As a native of that city, Shafer knew his fellow citizens and he knew books. Though he specialized in Bibles and Testaments, he strove for a variety of miscellaneous books, among other items, that would provide the most beneficial reading for his community.

He appears to have used his own imprint and improved bindings on some of the books he purchased. The latter would explain why the American Bookbinders Museum site displays a Shafer's ticket, though bookbinder is not specifically indicated on the ticket. It could very well have been the bookseller's label. I was hoping to find another example at the great Seven Roads Gallery, but no luck there.

From the publication referenced above, in the styled prose of the era, here is the complete description of Shafer's business, for which a knowledge of books and customers and dedication to both were the ultimate cup of tea for this bookseller:

SHAFER'S NEW BIBLE HOUSE,
J. Alfred Shafer, Prop., 134 North Seventh Street.
Establishments of this kind, well stocked with the latest publications, are not confined to the great cities, but will be found in every city and town, thus evidencing the intelligence of the community and at the same time furnishing the rising generation with facilities for extending their store of knowledge.

One of the leading stores in Allentown in this department of trade, and one that has a reputation peculiarly its own, is that known as Shafer's New Bible House. He occupies a desirable store, and carries an extensive, stock of Bibles and Testaments, of which goods he makes a specialty, and also carries a complete line of Miscellaneous Books, Albums, Stationery, etc. No establishment in the city has any finer variety or a stock more extended in its subjects.

He deals extensively in the latest standard works, many of those which he sells with his own imprint upon them, and in many respects much improved by handsome binding that is placed on them by his direction. Persons desirous of securing Standard and Miscellaneous Books, will find at this house a variety worthy their attention.

Mr. Shafer is a native of Allentown, and not only thoroughly understands the book trade, but has done much to promote the circulation of useful and beneficial reading in this community.

His establishment presents a scene of busy activity, and the proprietor is fast pushing his way to the very front rank in the business.