October 21, 2011
A few months ago, I had the pleasure of meeting, via email, Laurel Davis, the Legal Information Librarian, Lecturer in Law, and Curator of Special Collections for the Daniel R. Coquillette Rare Book Room in the Boston College Law Library. Somewhere in all that she also finds time to write the Rare Book Room's blog.

She was working on an exhibit of early Massachusetts law books and found a Bibliophemera post about Little, Brown & Company that featured an 1892 billhead and some information that seemed a good fit for the exhibit.

I was delighted to have her use it for The Golden Age of Legal Publishing in Massachusetts. I was actually in Massachusetts earlier this month, but on the western side of the state and just didn't have the time to see the exhibit in person. But there is the digital counterpart for those of us who can't travel to see this interesting collection of early Massachusetts law books.

During our correspondence, I indicated I might have more examples of related ephemera and set about finding for her any additional Little, Brown & Company or other Massachusetts law book publishers that might be in my collection. I had no luck, though I knew there was something.

I took another look recently and found what I was looking for--an even earlier billhead that had been archived in its original folded manner (that's how I missed the content before), as it had been mailed that way and contained the address of the recipient, a postage stamp, and evidence of the sender's wax seal. 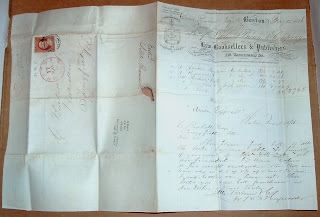 I thought I would include it here as a follow-up to the previous Little, Brown & Company post, with some added history for the customer on the billhead, and also alert readers to the Boston College Law Library exhibit. It's a good one. 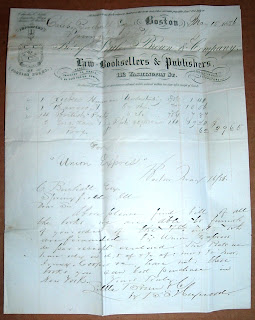 This is the only example I know of in my collection of a billhead or other business transaction paper being turned into its own mailer. 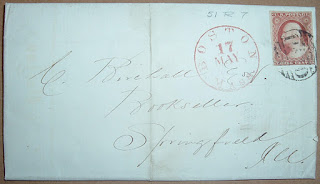 This billhead appears to be dated 1856, which precedes my other Little, Brown & Company billhead by nearly forty years. The three principals in the company include Charles C. Little, whose name was absent on the 1892 billhead. The other partners' names, Brown and Flagg, are also on the 1892 billhead, but those names belong to their sons who succeeded them in the business. 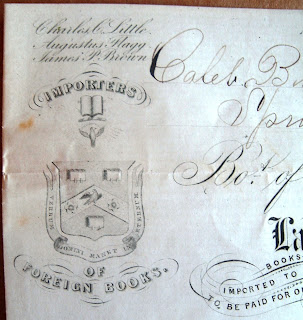 Also of interest with this billhead is the customer, Caleb Birchall of Springfield, Illinois. I thought of a lawyer in Springfield who might have had need for some law books from Little, Brown and Company. His name was Abraham Lincoln.

Caleb Birchall was a printer and bookbinder who moved to Springfield from Philadelphia in 1834 and became a respected businessman in the community. In 1848, he either entered into a new business, or expanded on his existing business. Surviving business documents indicate that 1848 was the year he partnered with druggist Thomas Jefferson Vance Owen to operate what became a very successful business selling a variety of items in addition to drugs and patent medicines of the day. They also printed and distributed a farmer's almanac, so it appears that Birchall didn't relinquish all of his printing business.

That Birchall was ordering books form a Boston law book publisher in the 1856 would indicate he engaged in bookselling also at the time of this billhead. Lincoln was known to have been a customer of the firm, having bought ledgers from them. Might he have also acquired a few law books as well from Birchall?

There is more documentation about Birchall's having been a bookseller in Springfield during the time Lincoln lived there. Allen Guelzo's Abraham Lincoln: Redeemer President and The Complete Works of Abraham Lincoln, Volume I. both refer to Birchall's bookstore in Springfield. Guelzo's reference includes a passage about the bookstore having operated a circulating library where one could find books by Scott, Cooper, Irving, and others. Coincidentally, the billhead to Birchall includes a note advising him that his request for books by Cooper and Irving could best be handled by a New York publisher.

However, Little, Brown & Company was able to furnish the following books, the variety of which belies somewhat the "Law Booksellers & Publishers" that appears on their correspondence: Locke's Human Understanding, Bancroft (US History?), British Poets, and English Law and Equal Rights.

So Birchall was stocking literature, philosophy, and history for Springfield readers as well as law books for Springfield lawyers. Makes you wonder if Lincoln ever strolled into the shop and bought a law book or two that just might have come from Little, Brown & Company. Now that would be a billhead to have and write about!