Felix Cunha and Incunabula Medica at the Roxburghe Club 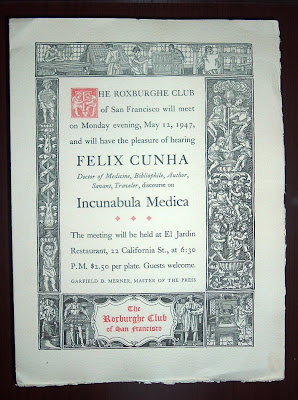 Here's a letterpress print announcement from Herbert Fahey for the Roxburghe Club in San Francisco in 1947.

The announcement, with an attractive border of antiquarian images of printing-related scenes, is for a presentation by Felix Cunha titled, Incunabula Medica. Cunha is described as a "Doctor of Medicine, Bibliophile, Author, Savant, Traveler."

The printer Fahey, whose name appears on the back, was active in the book arts in California, having served as president of the San Francisco Club of Printing House Craftsmen in 1929. The Book Club of California also published his book, Early Printing in California: From Its Beginning in the Mexican Territory to Statehood, September 9, 1850 (1956, printed by the Grabhorn Press). I would assume he might have also been a member of the Roxburghe Club, which was formed in 1928 in San Francisco.

What I know about Felix Cunha is pretty much what is printed on the announcement about him. As a bibliophile physician with an interest in medical books, he collected among other subjects, the work of Sir William Osler, a founding professor at Johns Hopkins Hospital. A 1987 issue of the Osler Library Newsletter confirms Dr. Cunha's interest in the writing of Dr. Osler, noting that Dr. Cunha's collection of Osleriana had been sold to the Woodward Biomedical Library at the University of British Columbia.

Osler, in turn, had an interest in the early printing history of medical books and wrote about that history in Incunabula Medica: A Study of the Earliest Printed Medical Books, 1467-1480. With that bit of information, one might wonder if Dr. Cunha was lecturing to the Roxburghe Club back in 1947 about an interest in incunabula medica that he shared with Dr. Osler, or was he talking that night about Dr. Osler's book? Regardless, it's likely that Dr. Osler's book found its way into the presentation.

Given Felix Cunha's interest in medical history subjects, it seems only natural that he would pen a few books and articles himself, a list of which can be found here.

Thanks to William R. "Bill" Holman for donating this Roxburghe Club announcement to my collection.