Los Angeles Booksellers of 1897 (and their labels)

November 22, 2011
Los Angeles bookseller, Ernest Dawson, wrote an article in 1947 for The Quarterly for the Historical Society of Southern California--Los Angeles Booksellers of 1897 (Volume XXIX, No. 2, June 1947). That article was reprinted that same year in the 12-page booklet below, by Saunders Press in Claremont, California.

The Saunders Press, by the way, was operated by Ruth Thomson and husband Lynne Saunders. Getting a bit off topic, researching Saunders led to this interesting article on the history of women in printing. Ruth Thomson Saunders also designed bookplates, some of which are featured in Knox College's The Art of The Book exhibit.

Back to the Los Angeles booksellers... In 1947, the author, proprietor of Dawson's Book Shop in Los Angeles, took a look back at the bookselling scene in Los Angeles as it existed when he first arrived in that city in 1897. He states in the opening paragraphs that Los Angeles had at that time "three good new bookstores and three secondhand bookshops with creditable stocks."

Dawson's article includes whom he supposed to be the first bookseller in Los Angeles--Samuel Hellman, who opened a book and stationery store in 1862. The article then goes on to list prominent booksellers in the city: C.C. Parker, Stoll and Thayer, and Fowler Brothers (all of whom had the "good new bookstores"), and Jones' Bookstore, J.W. Smith, and Henry Ward (the secondhand booksellers). Dawson worked for the latter, Henry Ward, when he first came to Los Angeles. The photo above indicates he was still with Henry Ward in 1900.

For each bookseller, Dawson offers bits of bookseller biography and bookshop history. He provides illustration in the form of the booksellers' labels that were affixed to the endpapers of their books for advertising. These labels, referred to also as tickets, are stamp-sized pieces of paper I like to feature from time-to-time on this blog, so I was pleased to find images in this booklet of the old Los Angeles booksellers (the labels don't necessarily date to 1897), including some that did not make Dawson's "top six" and one from Dawson's own book shop, which he started in 1905. 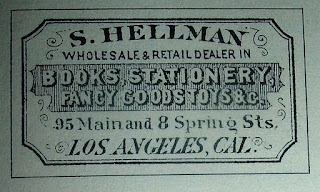 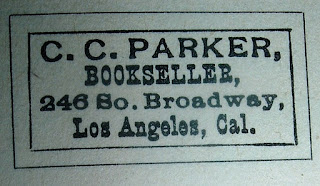 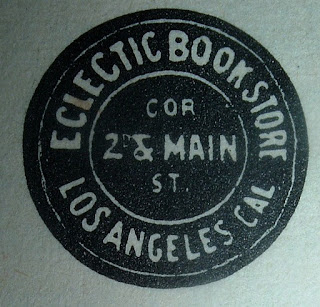 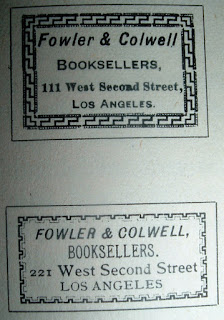 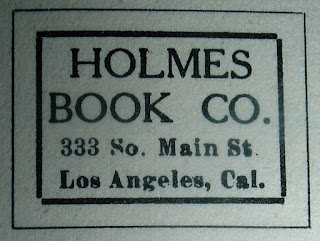 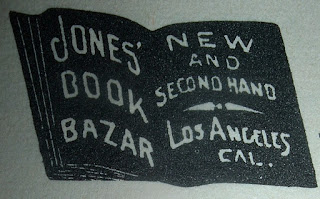 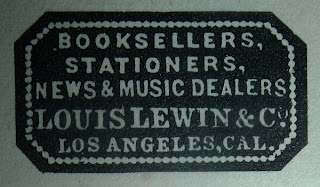 As always, when discussing book trade labels, please see the Seven Roads Gallery of Book Trade Labels site. Color examples of some of the above are cataloged there. Also, Gabe Konrad's new site, www.booksellerlabels.com is a great source of information on the subject.