A Pilgrim Bookstore in Plymouth, Massachusetts

November 24, 2011
Last year, I posted to this blog about a book-related piece of ephemera with a very weak link, if you could even call it that, to the Thanksgiving holiday we celebrate today in America. It was a blotter for the Pilgrim Bookshop in Brooklyn, NY. Pilgrim was as close as I could get to Thanksgiving. Told you it was weak. I also lamented that the bookshop wasn't in Plymouth, Massachusetts, for at least then it would have some connection to the Pilgrims and the first Thanksgiving celebration.

This year, I have a better connection--a postcard from the Guides Pilgrim Bookstore. I knew there had to be a bookstore in Plymouth with the Pilgrim name at some point in history. It's just too obvious a choice. 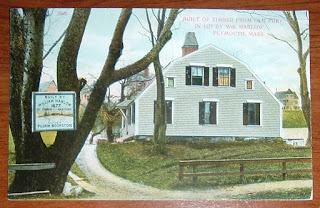 The bookstore was run by publisher and bookseller, A.S. Burbank (1856-1946), and was known for its pilgrim and Plymouth souvenirs.

This postcard was made in Germany and distributed by A.C. Bosselman & Co. in New York. It is likely a Plymouth/Pilgrim souvenir postcard that Burbank stocked in his store, not a depiction of the actual bookstore.

What is depicted is an old house built in  1677 by a William Harlow, as stated on the postcard. Further, the house is referred to as "Old Fort" and that the timbers from the old fort were used to build the house. That "Old Fort" was the pilgrims' first fort built in 1621 and presumed to be the site of the first Thanksgiving feast held in the fall of that year. 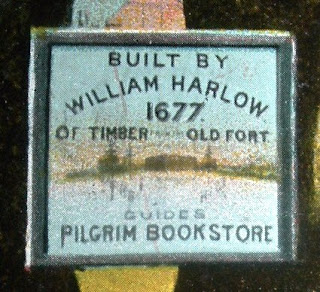 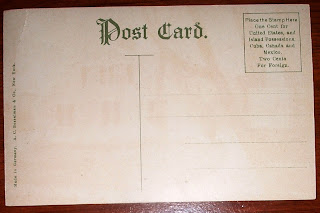