December 24, 2011
In 1875, Boston publisher D. Lothrop & Co. advertised a book on the envelope below, presumably in time for Christmas since they referred to it as "The Children's Book of the Season." The back side of the envelope offers additional evidence that Christmas was approaching. More on that in a minute. 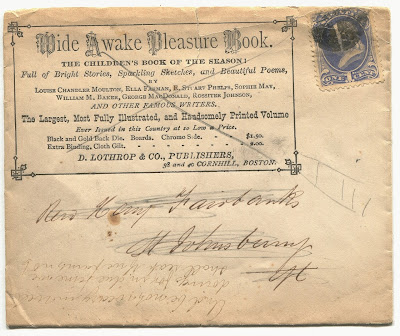 The book is Wide Awake Pleasure Book, and it came out about 1875, as best as I can tell. I have come across only one bookseller claiming a first edition of this book and the year given was 1875. The address for D. Lothrop & Co. offers a clue as well.

Daniel Lothrop, according to a Wikipedia page about him, established his publishing business at the Cornhill address in Boston indicated on the above cover above in 1868. In 1874, he began publishing a magazine for children that shares the name of the book advertised on this cover. A year later, the Wikipedia article states, he needed more space and moved from his Cornhill address to another Boston location. If the dates are accurate, the Wide Awake Pleasure Book must have been one of his last published books at the Cornhill office. By the way, the Thoughts of Bibliomaven blog offers a good bit of information on D. Lothrop & Co. with wonderful images of various books and ephemera, including the latest entry--a Christmas greeting.

More points of issue for the bibliophile or collector are revealed in the envelope's ad copy, which states this book is the Largest, Most Fully Illustrated, and Handsomely Printed Volume Ever Issued in this Country at so Low a Price. Evidently, this ad is for a later printing of the original edition. The book may have been a collection of writing from the popular magazine of the magazine of the same name and was itself popular enough to go through several editions at the Cornhill offices before the company relocated just a year later.

Aside from the bibliographic content on this cover, a bit of Christmas conjecture comes to mind in the form of a seasonal sermon and perhaps the wishes of child at Christmas time.

The envelope is addressed to Rev. Henry Fairbanks of St. Johnsbury, Vermont (scratched out at some point). Turning the envelope upside-down, there is a Bible passage written in pencil below the address: And be not weary in well doing, for in due time we shall reap if we faint not (which I determined to be from St. Paul's Epistle to the Galatians). Perhaps Rev. Fairbanks was drafting a few notes for a sermon--perhaps even a Christmas sermon with a message of charity and doing good deeds for others. 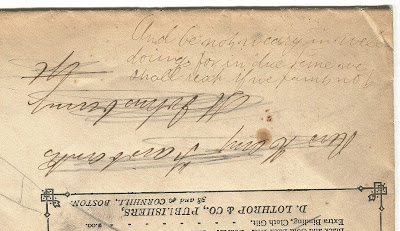 On the back of the envelope, in what looks to be a child's handwriting, there is an apparent address for St. Nicholas at December Holiday Harbor 74 (?), Grand Central Depot. 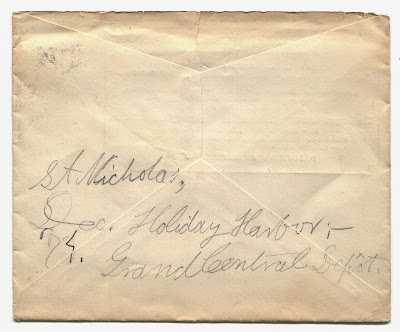 I've searched a number of combinations for the words above and cannot find anything related to "letters to Santa Claus" and Dec. Holiday Harbor and Grand Central Depot. So I can only wonder if Rev. Henry Fairbanks' name was scratched out by a child of his in an attempt to recycle this envelope to Santa with a Christmas wish for the book advertised on the front side. If so, I wonder if Santa heeded the Bible verse under that book ad and was not weary in his well doing Christmas Eve and put a certain book under a certain St. Johnsbury Christmas tree for a Christmas Day long ago in 1875?