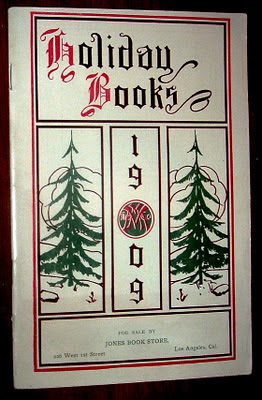 More than one hundred years ago--1909 to be exact--somebody probably enjoyed browsing new books in this holiday catalog from Jones Book Store in Los Angeles. Today, I am enjoying browsing the antiquarian selections from this now old catalog. But it is one of the best preserved old bookseller catalogs of this vintage I've run across. 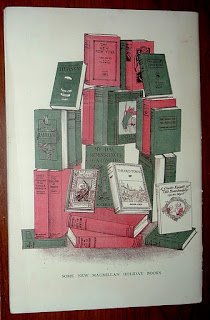 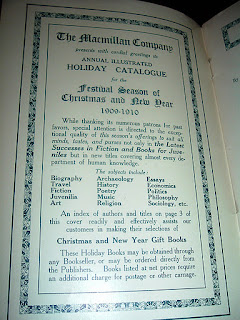 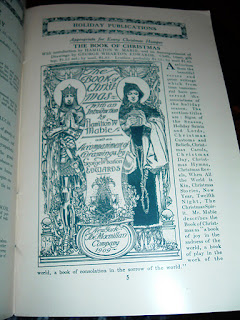 Lest the catalog reader be confused by the title about what kinds of books Jones' Bookstore was selling, they were not books about Christmas, the image above being the lone title. Most books appearing in this catalog seem to deal with exotic lands around the world, travel, history, biography, and a smattering of juvenile and religious works. Popular novelists of the day were not excluded either, as evidenced by the books of Jack London, shown below (featuring Martin Eden). 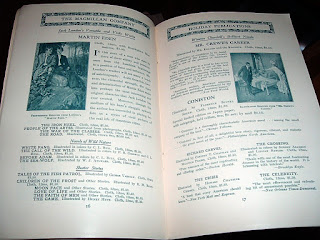 Just last month, I got acquainted with Jones' Bookstore through an article by another old-time Los Angeles bookseller, Ernest Dawson, in his reminiscences of book stores that existed in the city when he arrived there in 1897. Here's what he had to say about Jones' Bookstore:


Of the second-hand booksellers of 1897, Frederick D. Jones was a picturesque and aggressive character. I recall well the big rambling place, with balconies and crowded aisles at 226-28 West First Street. It was the mecca for school books, old and new for a whole generation of Los Angeles youth.

Mr. Jones was born in South China, Maine, November 30, 1855. He seems to have been the only early Los Angeles bookseller to get a college education. He graduated from Haverford College in Haverford, Pennsylvania in June, 1882.

He came to Los Angeles from Kansas City in 1886 and January 1887 opened Jones' Bookstore at 45 South Main Street and a year later at 53 South Main Street, which was the northwest corner of Second and Main.

In 1890 he moved to 226 West First Street where his shop was a landmark for so many years.

Mr. Jones was not a rare book dealer, but was a merchandiser of all kids of secondhand books. He had large sections of religious, medical, reference, and law books, carrying some popular titles new. One of the entrances was given over to cheap books, 2 1/2c, 5c, 10c and25c shelves and sections which always made for attractive browsing.

In buying libraries I still frequently come across the deep pencil marks of Mr. Jones and the universal rubber stamp with which he "disfigured" all books he sold.

Mr. Jones carried quite a stock of stationery, manufactured his own ink, published a few books and patented and marketed a rapid addition and multiplication device. He was an Odd Fellow and was active in various Civic Organizations. He called himself an "Evolutionary Socialist."

When, in 1904 Jones' Bookstore was incorporated, several of his faithful assistants were given blocks of stocks.

Through an unfortunate law suit Mr. Jones had to sell his interest in the store. It was taken over by some of the clerks and with some additional capital moved to a larger place on Hill Street between Sixth and Seventh. Later there was a final move to Sixth Street, between Hill and Olive, where during the Depression of the Thirties it disappeared. After Mr. Jones left the business, new books and stationery were more  and more emphasized and finally I bought out all that was left of the old book department, about 1930.