Maher's Bookstore in Laconia, New Hampshire sold the promotional calendar (Rust Craft of Boston) below in 1941. 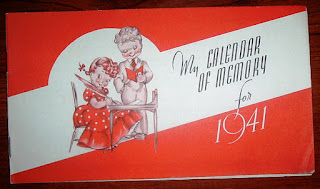 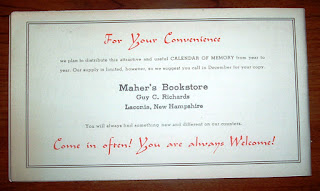 That year would turn out to be quite a significant year in US and world history, for on December 7th the Japanese attacked the US Naval Base at Pearl Harbor in Hawaii, killing more than 2,400, wounding another 1,100. The US declared war on Japan the next day and entered World War II. Lives and nations were changed forever by the events set in motion that day.

The person who owned this calendar filled it with birthdays of friends who were all teenagers by 1941. That young person may not have immediately appreciated how the course of history would be changed by the events of that day. The calendar entry for December 7th simply states: "Pearl Harbor." 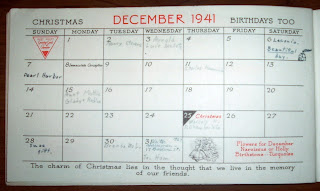 But, space considerations aside, what else could one say that day as the shock set in about what had just happened and what the attack on America meant for all Americans and a Laconia, New Hampshire teenager in particular? Pearl Harbor.

Libraries of words have since been written about that day in 1941, and seeing two words noted in a bookstore calendar the day the attack happened speaks volumes in hindsight about what it all meant.

On a side, and personal, note, my father was born in Laconia in 1931 and 20 years later was in Japan, courtesy of Uncle Sam and the U.S. Air Force, having been shipped over during the Korean War just months after marrying my mother. No doubt, the events that transpired December 7, 1941, when he was 10 years old, played a role in his being in Japan on a US military base a decade later after the Japanese defeat in 1945 and subsequent occupation by the Americans.