March 16, 2012
Booksellers Durrie & Peck started their business in New Haven, Connecticut in 1818. They would grow to add bookbinding, publishing, and printing to their services. Related to those areas of business, The New Haven Museum has about 1700 pieces of ephemera documenting the company's history up to 1860. One they don't have is this piece from my collection. 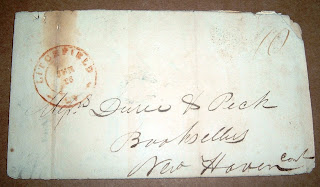 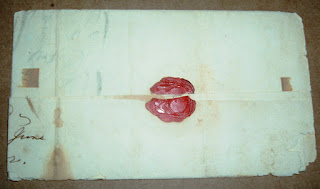 In the stampless, wax-sealed letter above, or what's left of it (see below), E.A. Luce has written to Durrie & Peck, and Durrie (with two r's) is the correct spelling, to order a few books, hoping they're in stock and hoping they can be delivered by the day's mail.

I began a search for information on the customer E.A. Luce and kept running into Edwin A. Luce, who was a Master Mariner on a whaling vessel. I thought this would lead to an interesting story on the reading habits of an old salt on whaling voyages. But he was from Tisbury, Massachusetts and the Durrie & Peck customer was from Litchfield, Connecticut, which is closer to upstate New York than any seaport town. A bit inconvenient for a whaler.

As I deciphered the handwritten order, I began to wonder why a whaler, or Master Mariner of other commercial ventures, would be interested in the requested books, which dealt with law and matters of taste and the philosophy of aesthetics. Not that a Master Mariner wouldn't be interested in such topics. It's just that I would expect books related to the sea or sailing vessels or whaling--tomes of the trade, so to speak. 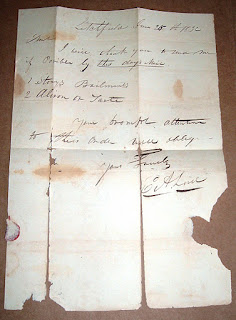 The two books E.A. Luce from Litchfield is interested in are noted only as Story's Bailments and Alison on Taste. A little investigation uncovered the full identity of these books. 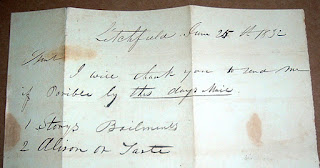 The first book would be Joseph Story's Commentaries on the Law of Bailments, With Illustrations from the Civil and the Foreign Law (Hilliard & Brown, 1832). Hilliard & Brown were predecessors to Little, Brown & Company.

The image to the left is provided with permission from Meyer Boswell Books, ABAA, of San Francisco, a specialist in rare scholarly law. They have an 1832 First Edition of the book that Luce sought from Durrie & Peck that year.

The other title Luce wanted was Essays on the Nature and the Principles of Taste, by Scottish Enlightenment author, Archibald Alison, published originally in 1790 by J.J.G. and G. Robinson (London) and Bell and Bradfute (Edinburgh). Presumably, Durrie & Peck had in stock a later American edition that Luce wanted. This philosophical collection of essays dealt with aesthetics and acquiring taste relevant to associations and emotions. 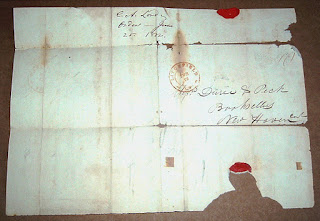 So there you have it--a sampling of the reading requirements, or perhaps I should say taste, of a Western Connecticut customer, preserved in his manuscript request to one of the area's more respectable and established booksellers of the day. One might deduce from this evidence that E.A. Luce practiced law and had a an interest in aesthetics and philosophy. A man of means and taste.

But I'd still like to encounter an ephemeral bit of evidence as to what the Master Mariner Luce was reading while at sea.