March 30, 2012
From that wonderful cache of Schulte's Bookstore correspondence I obtained a few years ago, I've plucked another interesting letter to showcase here. This one was written to Schulte's in 1944 by the renowned woodcut illustrator  Julius John (J.J.) Lankes (1884-1960), whose illustrations I featured in a recent post about Robert Frost. 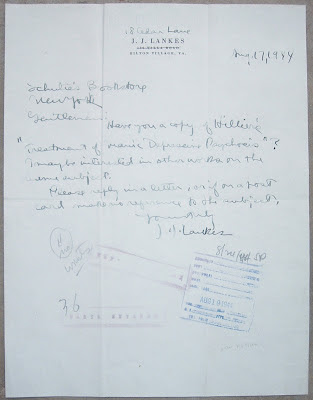 Mr. Lankes wrote the New York bookseller from his Hilton Village, Virginia home in August of 1944 seeking a particular title: Hillier's Treatment of Manic Depressive Psychosis. He also expressed an interest in other titles the bookseller might have on the same subject. He signed off his book request with another request about how to answer him--specifically, by letter, but if the response were by post card, Schulte's should do so without reference to the subject.

Who's privacy was Lankes trying to protect? His own? A family member's? 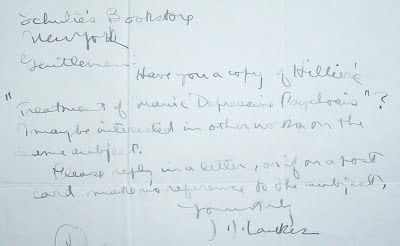 At the time this letter was written, Lankes was working for the National Advisory Committee for Aeronautics (succeeded by NASA) as head of technical illustrating in the reproduction section. Of this period in his life, Welford Dunaway Taylor writes in The Woodcut Art of J.J. Lankes (David R. Godine Publisher, 1999) that Lankes would much rather have been making a living as a woodcut artist. He seems to have been very dissatisfied with such labor, but knew he had to do it to survive.

But Lankes' dissatisfaction may have been more than just a temporary, work-related bad humor. In Taylor's book, Robert Frost, with whom Lankes enjoyed a long collaborative relationship, is quoted as having said "Lankes doesn't like anything."

Taylor also writes of Lankes' close friend Robert P.T. Coffin describing Lankes as a hard man to live with and that his work as a woodcut artist was about all that gave him any pleasure--everything else disappointed him.

Whether these psychological assessments were self-revelatory to Lankes or communicated to him by close friends or family, it would appear by his book inquiry to Schulte's Book Store that he wanted to learn more about what he might have assumed to be a " manic depressive psychosis."

It's also interesting to note in Taylor's book that Lanke's woodcut art declined significantly during his tenure with NACA. Could this have created a vicious cycle of sacrificing creative work for unfulfilling work to meet living expenses, which fed back into a growing depression?

Sherwood Anderson provided a personal portrait of Lankes as a younger man at the height of his artistic abilities in this 1931 Virginia Quarterly Review article: 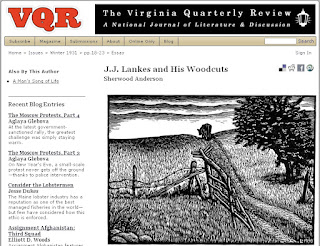 Anderson alternately characterizes Lankes as moody and silent and talkative and accommodating. Are there clues here to a possibly developing "manic depressive psychosis?" If so, Lankes apparently sought refuge in his creative expression, something he may have been denied in later years, either through necessary "survival" work or declining abilities.


Anderson writes of this "very significant man" from the perspective of the Great Depression of the 1930s when the whole country was "spiritually tired" and darker moods prevailed with many. Out of this darkness, Anderson found light in the work of J.J. Lankes.

He is reasserting the life and the beauty buried away in things, is always reasserting it in every woodcut he makes. It is his determination, his assertion and reassertion, as well as the beauty of his work that, it seems to me, makes Lankes, the Virginia woodcut man, one of the very significant living artists of our day.