Is it or isn't it a bookmobile?

As defined in Webster's Third New International Dictionary, the giant one that will give you a hernia trying to pick it up, a bookmobile is defined as an autotruck with shelves of books that serves as an itinerant library or bookstore.

So when is a bookmobile not a bookmobile? How about when it's a trailer, which is not an autotruck. A trailer is not mobile unless being pulled by a car or truck. But that technicality didn't get in the way of proclaiming the trailers below (two postcards and a photo) to be bookmobiles by their respective libraries. 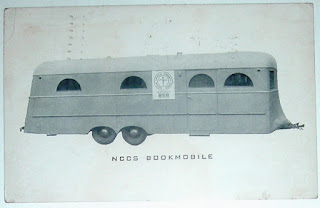 First up is what looks like a recycled horse trailer, being used by the National Catholic Community Service (NCCS) for the USO during World War II. 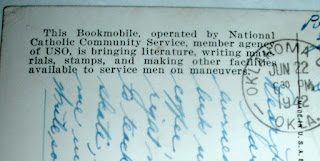 This was the first library trailer image in my collection and the reason for acquiring the next two images. I found the concept of a trailer an interesting alternative to the traditional autotruck bookmobile, a throwback to the horse and wagon or Parnassus on Wheels days, in a sense.

Next in this library trailer parade is a vintage pair in matching red. Here's a postcard from the Grace A. Dow Memorial Library, the public library of Midland and Midland County, Michigan. 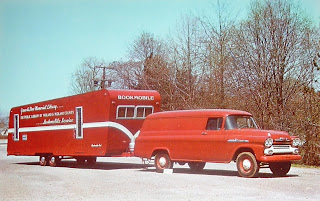 The reverse side reveals this trailer is a Gerstenslager out of Wooster, Ohio, a well-known maker of bookmobiles--autotrucks and otherwise, apparently, with this "first" for the company. This combo is called the "Tandem Trailer" Bookmobile. 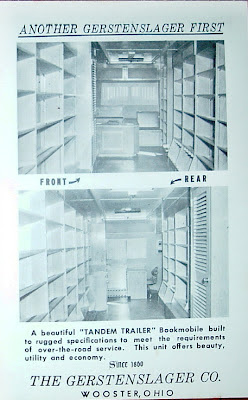 And, last in this trailer trio, here's the smallest of the lot--a relic from the Chicago Public Library that may predate the two trailers above. The subject anyway. The photo is a fairly recent reproduction, but I wanted it in my collection anyway for the content. 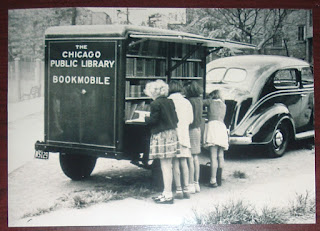 NOTE: After this post was published, I received a comment from Larry T. Nix (Library History Buff Blog), about a post he'd published on the subject: Book Trailers. His collection, and what he has to say about the subject, is much more extensive than what I have collected and posted here. It's well worth a read!