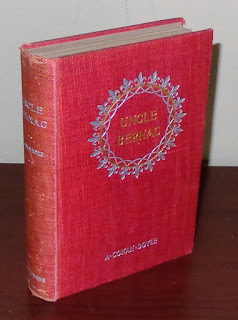 Scouting books in a second-hand shop a few months ago, I pulled from a shelf this copy of Uncle Bernac, by A. Conan Doyle, better known as Arthur Conan Doyle and as the author of the Sherlock Holmes books.


As I customarily do with older books, I checked the endpapers for a bookseller's label, or ticket, and a bookplate. Uncle Bernac had no labels from previous book shops where the book had resided during its life, but I found something more interesting--a book plate that introduced me to a fairly well-known book collector from the late nineteenth and early twentieth century--Philip Greely Brown. 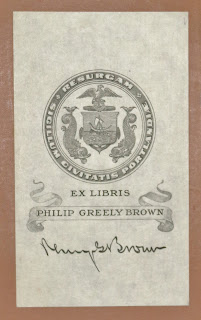 The provenance of the book begins with Brown. Above his bookplate in the upper-left corner are his initials and the date June 97, which is the publication date for this copy of Uncle Bernac. That makes sense--a bibliophile would want to purchase first editions.

Then in 1951, somebody named Dave bought the book and presented it to his father for a Christmas present. Fast forward to 2013, more than a hundred years since Greely installed his ownership marks, I have the book. Looks like Dave's dad and whomever else might have owned it took pretty good care of it. 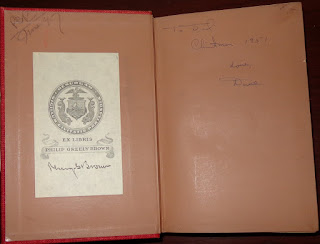 I wanted to learn more about Greely and his books and barely a month later I found and acquired a catalog for the sale of his library:

The Library of the Late Philip Greely Brown, Portland, Maine, to be Dispersed at Public Sale by Order of National Bank of Commerce of Portland, Executor, Tuesday and Wednesday October 15 and 16, at 2:15 p.m. 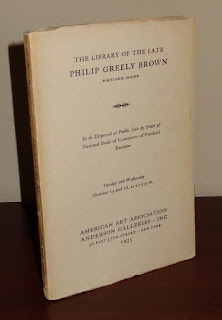 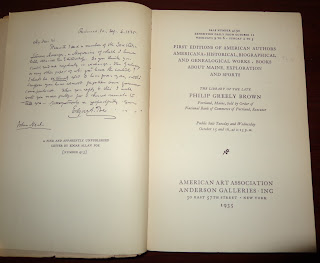 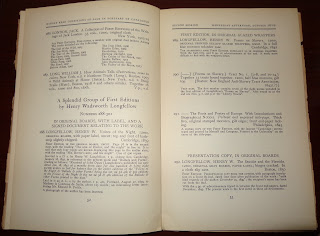 Philip Greely Brown was born about 1855. An entry in the In Memoriam section of the The Diamond of Psi Upsilon, Volume 21, Issue 2, 1935 states that he died December 18, 1934 in Portland, Maine in the house he was born in. Further, he was graduated from Bowdoin in 1877, which helps estimate his birth year, assuming he was about 22 years of age when he left Bowdoin. Years later, he would establish and provide the funding for a composition prize at his alma mater in memory of his father--The Philip Henry Brown Prize at Bowdoin College in Portland, which is still awarding two annual prizes to members of the senior class for excellence in extemporaneous English composition.

A successful businessman and leader in the community, Brown became President of the First National Bank of Portland and of the Board of Directors of the Portland Public Library. He also inherited and managed real estate holdings from his grandfather's estate. All this would indicate a man with the means to collect fine books, though that escapes mention in the fraternity journal.

The auction catalog for Brown's library offers no biographical information, unless you consider a man's library a portal into his character or personality. Scanning the titles, his collection was heavy in history, Americana, and literature. No estimated values or starting bids are given.

I can find no mention of a wife and children nor any other heirs, which would help explain why his library was auctioned by order of a Portland bank. But I did find an image of Brown from 1877, presumably a graduation photo. Below is the image, shared courtesy of the Bowdoin Library Archives Image Gallery: