March 29, 2013
Review slips or letters from publishers often accompany review copies of new books they offer to booksellers. I usually find them tucked inside the front cover (example here), containing language that states the bibliographic details of the book, expected publication date, and a request to send reviews to the publisher. The American Booksellers Association refers to this as Advance Access on their Web site. And when I find them they exist as originally sent, as they are not forms to complete. Rather, they provide contact information for sending reviews.

Not so the one below, which I got a kick out of because it appears the reviewer intended, for some reason,  to recycle the request itself into a review of sorts or at least a notepad for later transcription into a proper and separate review piece.

This 1986 review copy of Tito's Flawed Legacy: Yugoslavia & the West Since 1939, by Nora Beloff included a review slip from the publisher, Westview Press (Frederick A. Praeger, Publisher) requesting copies of any reviews of the book. The reverse side was blank. But not for long.

Working around the margins in a clockwise fashion and then in the center, the review, if that's what this scribble is, uses most of the available real estate on this 4 x 5.5-inch slip of printed paper. Flipping it over, page references continue the notes or review, covering the entire backside. 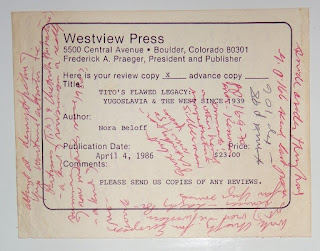 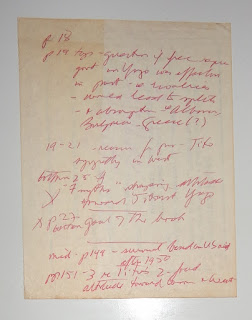 I can't make out any of this, save a few words, but here is the sequence I would suppose someone at the publishing house would have had to read had this piece actually been sent in. 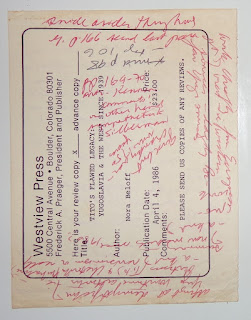 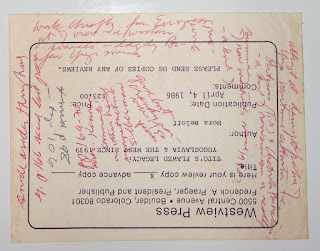 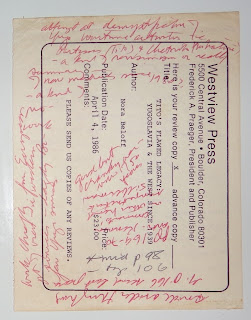 Impossible to know if these notes made it to the publisher in some form. The only thing I can say for certain about this is that it was put back in the book where I found it a quarter-century later.