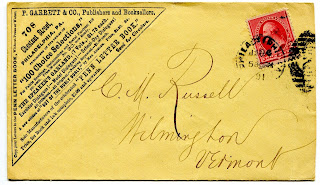 Here's a nice corner ad cover for a Philadelphia publisher and bookseller, P. Garrett & Co. This is reminiscent of another corner ad cover featured here previously--S.H. Zahm & Co., also of Pennsylvania, in Lancaster. The postmarks are only a year apart and I wonder if perhaps the same designer created both for those and other merchants throughout the region. 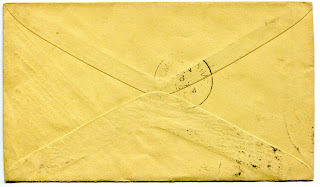 Of Garrett, I can find little information, but his ad cover tells you a bit about his business at the time, which was 1891. He published and sold a series you can still find a good number of today: 100 Choice Selections. Those choice selections of poetry and prose, as the ad states, could be used for public readings, declamations, and social pastime. At 30 cents, the 216-page books sound like a bargain even in those times.

Below is a Google Books image showing the title page of one of these publications several years prior. This piece provides Garrett's first name--the P stood for Phineas. 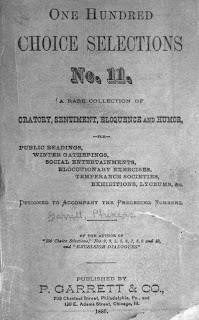 Back to business in 1891... Phineas Garrett also published The Speaker's Garland, a 7-volume set priced at $1.75 each. There were also Excelsior Dialogues, Model Dialogues, and School-Day Dialogues, each for a dollar, all original and nothing repeated. One final plug crammed into this triangular ad is for Max Adeler's Out of the Hurly Burly, which was the most popular work of this forgotten humorist. Max Adeler was the pseudonym for Charles Heber Clark. Clark had a long-running feud with Mark Twain, in which each accused the other of plagiarism.

One last item, which gets a bit more ink in this piece's ad space is the Penn Letter Book, for which P. Garrett & Co. are the sole manufacturers.

The Penn Letter Book, well in advance of photocopy technology, offered a means for creating copies of written letters "without press or water." This product, somewhat of a precursor to carbon paper copying, was marketed to companies that needed copies of important business correspondence for their records. All one needed to do was to place the written correspondence under the Penn Letter Book paper and hand rub it to create a copy.

The Library Company of Philadelphia, Digital Collections, has a copy of an 1868 circular for this product (shown below), which the ad on the cover states were available to customers for more information. 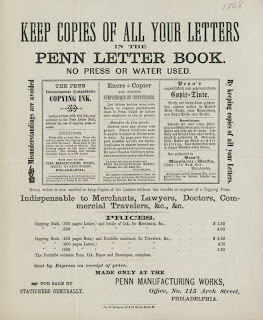 Below is an ad from the Publishers' Uniform Trade List Directory, an 1869 publication, split into two images for better resolution (click on the image for an enlarged view). 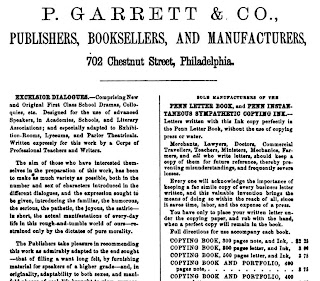 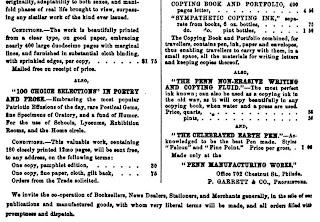