Michigan and the Cleveland Era - Why was this book written? 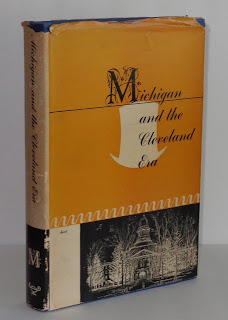 At first glance, though, no question arises as to why the book was written. But just inside the front cover, a printed answer is provided anyway on a 5 X 7-inch card from the Michigan Historical Collections, University of Michigan. 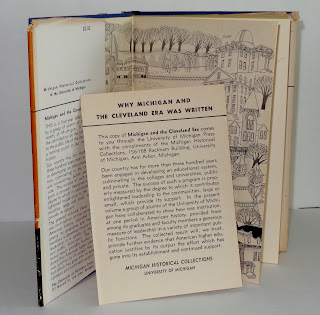 This card was previously featured in another post I wrote about three years ago on ephemera concerning rare books and collections at the University of Michigan. I came across this card again and thought it deserved its own post because it's a bit unusual. 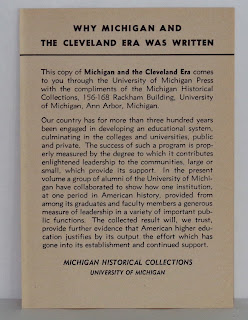 Looks like a good number of University of Michigan alumni and faculty members served in numerous capacities during the Cleveland era. That may or may not be of interest to many, but the publisher found it interesting enough at the time to print this history. And beyond the extraordinary contributions of alumni to that period of history, a bigger statement was made about the value of higher education in general and justification for its continued development and support.

What I found interesting was the publisher's printed response to a question that may not have ever been asked. Actually, it seems a quick-start device for introducing the book to a reader who has barely gotten past the front cover. The University of Michigan Press may have even considered it a bit of a promotional piece for the university and its libraries' archives.

A few pages in, the authors expand on the condensed intro rather profusely with 21 pages of their own making. Add a brief Foreword by university president Alexander G. Ruthven and any question about the book's existence is adequately addressed.

I've never seen a piece such as this, accompanying a book to offer a brief explanation of why that book was written. Certainly, the University of Michigan had bragging rights to this topic and was proud of its history. Perhaps it's wasn't terribly uncommon back when, just uncommon now to find the printed piece. Placed loosely inside the cover, most were probably lost over time. This one survived with the book to brag another day, some 65 years later.