This copy of Ship of the Line, by C.S. Forester contains a Naples Library bookplate that triggered an instant memory of being on a ship in Naples, Italy about this time last year (see A Napoli Bookseller's Postcard).

Now, which Naples was this library in? I knew it wasn't in Italy, given the English printing on the label, but how many towns in the US are named Naples? 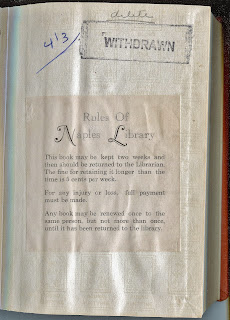 Naples, Florida seemed the most likely choice, but as I looked through the book for clues, I found a sticker on the endpapers in the back of the book that stated this book came from Naples, Maine.

I've been to Maine a number of times, but never heard of a town named after Old Napoli. If you hug the coast in your Maine travels, you'll miss Naples. Although inland about 30 miles or so northwest of Portland, it does boast of a waterfront location--freshwater instead of salt water like its namesake in the Mediterranean. Naples, Maine is a resort town on Long Lake.

From the library's Facebook page, below is a photo of the library from which the Forester volume got kicked out. Looks like an inviting place to read or browse for books. 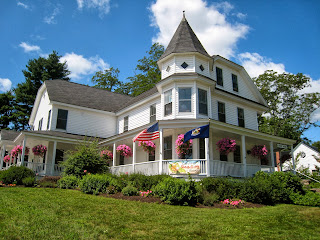