November 08, 2015
In 2009, I blogged about an old billhead from New Orleans bookseller, F.F. Hansell &Bro., dated 1900. There wasn't much information on that piece to indicate what kind of stock Hansell had in his store, but comments on that post indicated office furnishings were in the mix along with a few books. I wondered if they sold "real" books or maybe just account books and ledgers for businesses in addition to a few school texts a standard author or two. That question was answered with a recent addition to my collection--a Hansell brochure/catalog of popular books and standard authors representing an impressive inventory of quality literature. Real books. 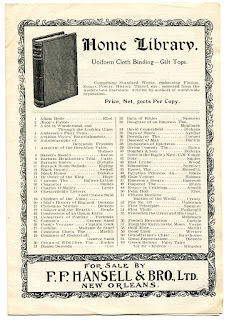 This undated (appears circa 1900), 7 X 10-inch folded sheet features Hansell's Home Library on the front (and continuing on the next page), with 204 cloth-bound volumes dressed in gilt tops to choose from. Titles such as Aesop's Fables, Alice in Wonderland, Emerson's Essays, Carlyle's French Revolution, Robinson Crusoe, Swiss Family Robinson and on and on. Standard works in literature, history, travel, etc. 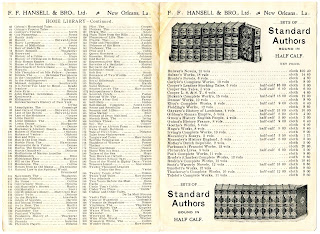 Page three above advertises Hansell's multivolume sets of standard authors, bound in half calf. Here you would find Dickens' Complete Works in 15 volumes, Gibbon's Roman Empire in 5 volumes, and many others considered standard authors of the day. 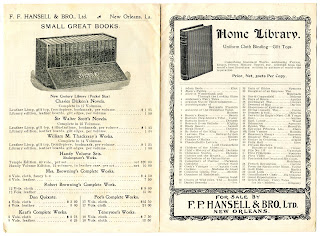 Continuing that multivolume theme, the last, or rear, page offers a small sample of the great authors' works in small books, bound in leather or cloth. The illustration of the Dickens set implies that these sets came housed in a leather case. The "New Century Library" refers to the edition and the publisher

Thomas Nelson's name keeps coming up as publisher in repeated searches for these pocket size editions, though the publisher is not named in Hansell's brochure. It's doubtful that F.F. Hansell used the same name as Thomas Nelson did for their multivolume sets.

Regardless of the publisher, this little advertising piece shows that not only did F.F. Hansell deal in "real" books, they offered an impressive array of literature in various affordable editions and bindings for the reader or student of serious literature.